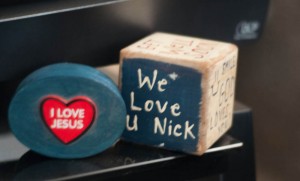 The King of Moab was terrified.
The Israelites were approaching his people after destroying the Amorites.
He knew the Moabites were next.
So he did what any king would do in such a critical moment,
but it probably wasn’t the best plan available.
He sent some of his messengers to Balaam, a man who had a great reputation for blessing and cursing people
(I guess you could have a great reputation for that kind of thing back then.)
He wanted Balaam to come to Moab and place a curse on the Israelites as they approached his country.
Here’s what happened next:
“And they (the messengers) came to Balaam and repeated Balak’s words to him. And he (Balaam) said to them, `Spend the night here, and I will bring word back to you as the Lord may speak to me.’ Then God came to Balaam and said, `who are these men with you?’ And Balaam said, `Balak the king of Moab has sent word to me, “Behold, there is a people who came out of Egypt; now come, curse them for me; perhaps I may be able to fight against them, and drive them out.” And God said to Balaam, `Do not go with them; you shall not curse the people; for they are blessed.’”
Imagine Balaam.
He’s so good at what he does that his reputation has reached the ears of the king.
He has been summoned to use his gift to save a country.
The king has actually requested his presence.

This must have been a huge honor in Balaam’s eyes,
and yet look at God’s response to the invitation.

God makes it very clear when He says,
DO NOT GO.
God even tells Balaam why He doesn’t want him to curse the Israelites.

“They are blessed,” God says.

Now comes to the dilemma.
Balaam has received a clear message from God, a clear command from God, and a clear reason for not going to Moab and cursing the Israelites for Balak.
He actually has enough information from God in order to explain why He is not suppose to curse the Israelites.
But listen to his short reply:
“So Balaam said to Balak’s leaders, `Go back to your land, for the Lord has refused to let me go with you.’
Balaam could have told these messengers,
“God told me not to curse the Israelites because they are blessed.”
Instead, he simply says,
“Go back, the Lord has refused to let me go.”
It’s almost as if he is implying,
“I would go if I God would let me.”
I’m not sure if it was fear that kept Balaam from saying more to the messengers or if it was pride, but whatever the reason,
Balaam missed his first opportunity to declare a message from God.
The story goes on to say that Balaam gets another chance to go to the Moabites and is almost killed on the way to deliver God’s messages.
This morning, though, I’m stopping on the first missed chance at speaking the truth.
I’m stopping at the place where Balaam wants to do something even though God says no.
“The Lord has refused to let me go.”
Balaam wanted to stand before the king.
If he hadn’t cared so much about the prestige,
he would have given God’s message to the messengers right that minute and let them take it back to the king.
By saying “The Lord refused to let me go,”
he sends the message that he really wishes he was coming himself.
This leads the king to try again with the offer of more money.
Balaam’s heart was all about his own glory and his own ability to deliver a message.
Today, I want to be sure that the things I say and do come from a sincere heart,
not a heart that longs to do one thing but chooses not to only because God refuses to let me.
I want to be in agreement with God’s will, not begging for my own way or blaming Him for the things I am not allowed to do.
I want to follow Him not be dragged along by Him.I want my heart to match the heart of God, so that when He says “no,”
I can joyfully accept and understand His answer to my questions rather than looking at them as a refusal to my desires.
Before I close, I want to thank you for praying for me yesterday.
When I went to the doctor, I discovered that I was experiencing a migraine.
I’m feeling better this morning and my eyes are back to normal!
Love you all.

Tammy Nischan Comments Off on A Heart Question Faith