Two Pennies, A Cross, and An Unexpected Memory

I knew I had a choice.

Dive all the way in or run far, far away.

There was no half-way about the decision in front of me.

because either way has a cost.

But this particular moment of decision didn’t feel quite like my own.

God had opened doors so strategically that I knew deep inside one option for turning had been blocked with a “Road Closed” sign,

the day after crying most of the morning………..

and determined that if God had brought me to it,

He would surely see me through it.

Moving furniture and throwing away things left by other people,

I slowly made this little corner of the world my own.

And as I picked up the cleaner to begin wiping down the shelves,

had no idea I would be hearing the sound of metal clinking metal as a penny fell from somewhere above and landed right in front of me.

A bookshelf seems like an odd place for a coin……….

the year before Adrienne was born………

The year before my marriage had felt anguish.

The year before my young self had known such personal loss.

The year before our two oldest boys would聽stand聽by their sister’s grave and say, “Bye for now.”

“I’m just as present with you today as I was then.聽 Be strong.聽 Lean on me.聽 You’ve been through such bigger life changes.”

I smiled quietly to myself and thought, “Adrienne is cheering me on,” and that was enough to keep me going; and I slipped the penny into a pocket of my purse. 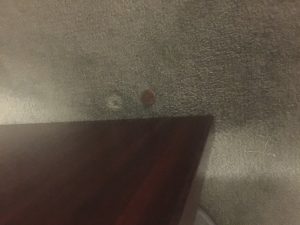 It was as if Nick tugged on my sleeve and said, “I’m cheering too, Mom.聽 You’ve got this!!”

I slowly picked up this new little piece of copper and read the year……….

Nick was with us in that year.

Grief still walked with us in 2000, but eight years had passed since Adrienne was suddenly taken from our home and there’s something about time that changes sorrow into hope if you keep your eyes on the cross.

It’s now been eight years since we said good bye to Nick.

Is that what this penny and Nick were trying to say to me?

As I slid this penny into my purse right next to the other one, I felt a strange peace come over me.

God had transformed this new and scary world into a sanctuary.

God was with me.

Why did I ever feel alone?

Thinking my encounter was over, I opened the drawer to see what supplies were already there………….. 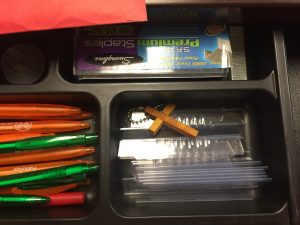 How much more did I need??

Why did God choose to speak so loudly??

How could I be so blessed?

Two pennies and a cross…………

and then the unbelievable happened.

Last night as I was sitting in a friend’s living room talking about our days, I received a text from my son in Japan.

All it said was to watch a second-long clip of a spoken-word video he had attached.

He gave me the exact time in the video, so I went straight there, thinking I may see a clip he made while doing mission work.

When I got there, though, my mouth dropped as I watched Nick jump from a diving board…………….

splashing his way back into life after having his pic line removed and his first long cancer treatment series completed. 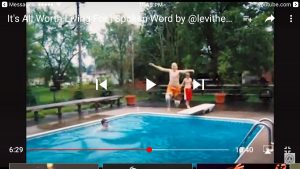 Telling Todd eight years later that the answer to the question,

“Why is life worth living?”

jumping high and jumping brave with no hair and pale skin.

Isn’t that what we all need to hear?

Living big isn’t wealth or fame or money or anything we can touch or spend or own…………….

it’s jumping high and brave when our hair is gone and skin is pale.

It’s living every moment as if it’s our last and even if it is we know it’s okay……..because we lived strong and hard and full and deep until God said,

but not a second before that did we ever say,

Thank you, Levi the Poet, for writing such powerful words.

Thank you, Todd, for answering his question with such a powerful moment from one of the hardest chapters in our family’s life.

So what will I do today?

How will I live?

How will I face more training and more stretching?

I will face it big and brave!!!

Because every breath is a gift from Him who loves me most.

I’m praying your day is transformed into a place of Holy encounters as you praise Him while you have your being.

Don’t run the other way.

I will praise the Lord as long as I live;

I will sing praises to my God while I have my being.