Sometimes when I read the Bible,

I try to imagine what it would have been like to be an Israelite in the days of Moses.

Following a pillar of cloud or fire,

hearing the voice of God rumble from them.

Enough for me to know how blessed I was.

Saved from the bondage of slavery.

Rescued by the parting of a sea,

Being led to a land flowing with milk and honey.

But I know the truth.

I know I’m no different than the ones who grumbled,

“pots of meat and piles of bread.”

It’s so easy for me to second-guess God’s presence.

I can cheer everyone on but myself.

And as much as I hate to admit it,

there would have been days when I,

would have sat in my tent feeling as if the Red Sea wasn’t enough.

I remember being at a writers and speakers conference the summer after Nick died.

I had already paid for my registration fee,

so my husband convinced me I should go.

As I sat in my small group,

listening to everyone introduce themselves and tell a little of their story,

One woman was a former state pageant winner who now coaches teen girls toward the same goal.

Her story was powerful.

And the more she talked,

the less I wanted to.

I was a grieving mom.

That was my story.

We were given our first assignment.

Prepare a devotion to share at the next session.

Why was I here?

All I really wanted was to go back home.

And I just couldn’t imagine finding words to share.

Later in the day, I visited the prayer room open to all attendees.

As I entered the candlelit room,

I saw tables decorated with easels and candles lining each wall

and beanbags filling the middle of the room,

offering a place for attendees to sit and be still.

As I walked closer, I realized different names of God were framed and sitting on each stand.

And below them, scattered on the table were slips of paper with our names.

The conference staff had prayed over each of us and then laid our name under the name of God they felt we needed most in our lives at that time.

I walked around the room and read each name for God,

looking for my name below one of them.

I reached the end and hadn’t found mine.

I almost left, thinking maybe my name had been overlooked on their list.

Doesn’t discouragement trickle over into every aspect of life?

Something inside me decided to look once more.

This time I saw it.

My name was there.

What name of God had they placed me under?

I couldn’t wait to see.

Sometimes it’s hard to know what aspect of God we need most….

until someone shows us.

Today was one of those days.

I wish I could explain how I felt when I saw it.

Suddenly, I thought of the pageant winner from my small group.

The only banner I had ever won was for “Most Children” at my twenty-year high school reunion. 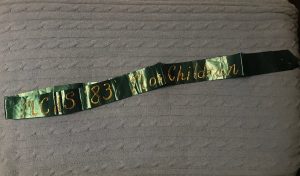 God was reminding me of something.

He was the only banner I needed.

And just as Moses had led the Israelites in defeating the Amalekites,

He was lead me in defeating my grief….

and my discouraging way of thinking.

I’d love to say this moment transformed me forever.

But I still have days.

When I sink into my tent.

Focusing on the past.

And on those days,

I’m so thankful for a God who isn’t just my banner.

He’s my Comforter, too,

a Father who patiently loves me through my not-so-pretty days.

Then leads me out again.

Pushing me forward on my journey.

Milk and honey are coming.

They’re just not quite here yet.

And isn’t that all I really need?

I’m so thankful for a God who doesn’t give me everything at once.

My daily need for Him is what keeps me stepping forward.

and He is always on the move,

leaving a trail of nourishment along the way.

I just have to step out of my tent to find it.

On the days when the Red Sea doesn’t feel like enough,

And for that I’m forever thankful.

And one day He will be my crown.