Blog Nativity Challenge….What Do You Need to Move?

Well, I can’t pretend that the last few days have been easy. I have had so many tears and the loss of Nick has sunk in to a much deeper and more painful reality in my heart.

Thank you for every email note, every card, every phone call,and every prayer.

But, I knew had to pull it together yesterday afternoon, because I had scheduled back-to-back Christmas parties at our home later in the evening. One was for my dear friend Wendy Tooley’s business and the other was for our college student life group. I had originally thought this would help keep my mind occupied, but the truth is this: you can’t stop being sad just because you’re busy: tears sometimes can’t be stopped and the pain in my heart can’t be pushed down all of the time…..So, I gave myself a day of pajamas, cleaning, crying, and remembering………….and thankfully was then able to survive both parties with no tears!

As we were cleaning up from the night, I really wanted to move my Nativity set which I had placed on the table with the snacks to a special place in my kitchen for the holidays. (Remember the Willow Tree set I was given by five of my friends last year right after Nick went Home?) I’ve had it out all year long in my little office, but I wanted to share it with EVERYONE for the next month…..so I was looking for just the right “home” for my sweet Mary, Joseph, Baby Jesus, and all of His followers…animals and all!

We tried the counter, but I was so afraid that a piece may get broken so we pulled all the pieces out and began to look around the kitchen for a safer place to display them. 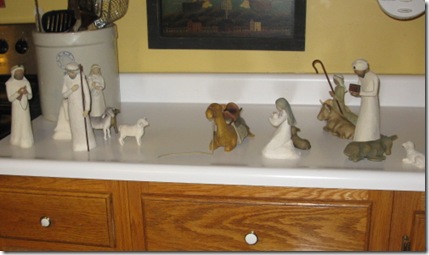 Then we saw the microwave sitting so snugly in its built-in home…ready to deliver us hot treats in a few seconds flat. 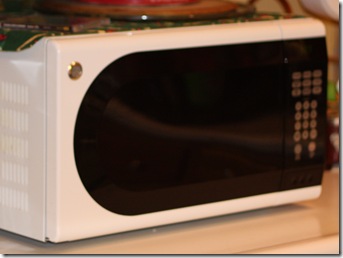 It was almost too good to be true! A safe home had been found in the midst of my often chaotic eating area!! I felt as happy as the innkeeper must have felt when he remembered he had a stable out back that had room for visitors! 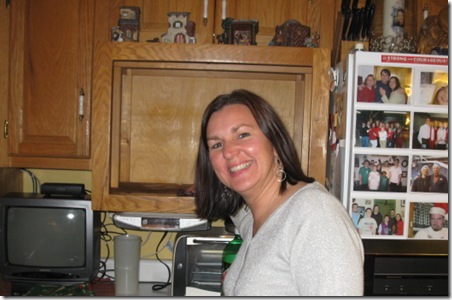 With Sarah’s help (she’s a sweet student at the college where Tim teaches), we relocated the microwave! It was a messy job. The microwave hadn’t been moved out of this spot in years..dust had collected all around it, and grease and grime coated the edges of this electronic convenience. But after some scrubbing, we were able to place it on a counter where it will work perfectly for the holiday season. 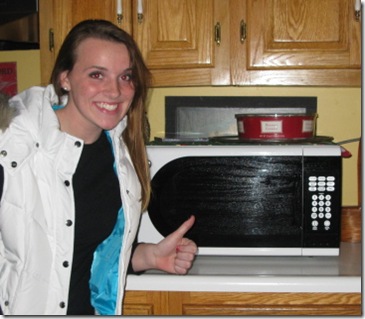 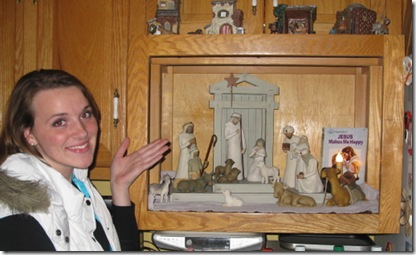 Then we moved in piece-by-piece of the Nativity set, added a candle for warmth, and an old children’s book called “Jesus Makes Me Happy,” along with my little message board, “The Best Things in Life are Not Things” which I’m thinking Mary must have surely agreed with as she sat in a cold, straw-filled stable surrounded by farm animals while cuddling her newborn Son of God! 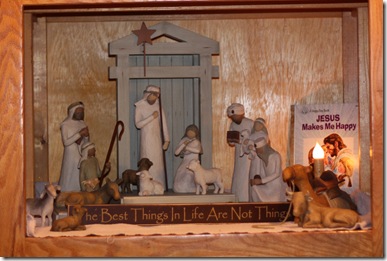 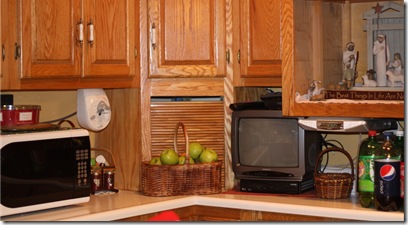 As we stepped back to survey the transformed kitchen, it struck me so poignantly……

Christmas brings with it such a hustling, bustling series of activities, programs, parades, events, concerts, and parties that we often “rush” through the season trying to get everything done in “a few seconds flat” just like a microwave!

But God longs for us to come kneel at the manger and simply soak in His Gift…………….

in spite of our busy schedules or even in spite of the sadness we may be feeling especially at this time of year.

So my question for you tonight is:

“What do you need to “move” in order to see Jesus more clearly?”

And my challenge is:

Find the busiest place in your home and transform it into a Nativity scene reminder.

Remember, this can sometimes be a little messy but in the end WORTH EVERY BIT OF TIME AND ENERGY!

Cause your family to stop, take notice, be still, reflect,

REMEMBER THE MIRACLE OF THE MANGER. 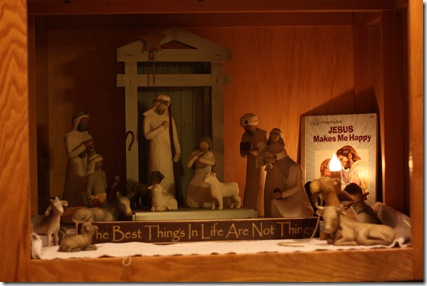 Then email me pictures and/or a story if you can, and I will post them all on my blog on December 12th!

PLEASE SHARE YOUR STORIES EVEN IF YOU CAN’T SEND PICTURES!!!

The Birth of Jesus

1In those days Caesar Augustus issued a decree that a census should be taken of the entire Roman world. 2(This was the first census that took place while Quirinius was governor of Syria.) 3And everyone went to his own town to register.

4So Joseph also went up from the town of Nazareth in Galilee to Judea, to Bethlehem the town of David, because he belonged to the house and line of David. 5He went there to register with Mary, who was pledged to be married to him and was expecting a child. 6While they were there, the time came for the baby to be born, 7and she gave birth to her firstborn, a son. She wrapped him in cloths and placed him in a manger, because there was no room for them in the inn.

8And there were shepherds living out in the fields nearby, keeping watch over their flocks at night. 9An angel of the Lord appeared to them, and the glory of the Lord shone around them, and they were terrified. 10But the angel said to them, “Do not be afraid. I bring you good news of great joy that will be for all the people. 11Today in the town of David a Savior has been born to you; he is Christ[a] the Lord. 12This will be a sign to you: You will find a baby wrapped in cloths and lying in a manger.”

13Suddenly a great company of the heavenly host appeared with the angel, praising God and saying,
14“Glory to God in the highest,
and on earth peace to men on whom his favor rests.”

15When the angels had left them and gone into heaven, the shepherds said to one another, “Let’s go to Bethlehem and see this thing that has happened, which the Lord has told us about.”

16So they hurried off and found Mary and Joseph, and the baby, who was lying in the manger. 17When they had seen him, they spread the word concerning what had been told them about this child, 18and all who heard it were amazed at what the shepherds said to them. 19But Mary treasured up all these things and pondered them in her heart. 20The shepherds returned, glorifying and praising God for all the things they had heard and seen, which were just as they had been told.