How Victory Changes Our View of Things……… 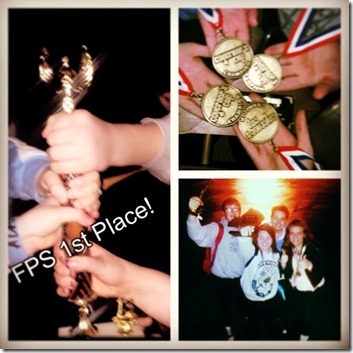 Saturday, I spent the entire day with the academic team I coach at our area high school.

Our Future Problem Solving team had made it to regionals, so it was an exciting day as we awaited the results of their hard work earlier in the week.

The first and second place teams at regionals get to advance to state competition, so all day long the kids said, “I hope we get first or second……or last place.”

They didn’t want to “almost” make it.

When they called the top four teams to the middle of the basketball court, there was no longer a last place option.

We had either “made it” or “almost made it.”

One of the girls on our team said later that at that moment she thought, “Great, we got third and barely missed going to state.”

Then third place was called.

The kids on our team began to scream as they realized they were moving on to the next level of competition.

Then second place was called, and suddenly they went from being happy to ecstatic as they realized they had not only made it to the state level but had beat everyone in the region!!

Tears came to my eyes as I watched the kids celebrate!

I hadn’t been a part of all of their hard practices for this particular event, but I was fully aware of just how much time they had put in preparing for this moment.

They had earned this victory in every sense of the word.

On the way home on the bus, the sun was setting with a purple-orange glow.

One of the girls on the team looked out the window and said,

“The sky is beautiful tonight.”

Immediately, another girl on the team replied,

“Everything is beautiful tonight.”

I smiled as I thought to myself,

Today, I’m hoping you see life as a race you long to finish victoriously.
Not only that, I hope you see every single day as an opportunity to walk in either victory or defeat.

I’ve been handed others.

But, I know that God longs to give me a life of victory.

I have to make the choice to look at life from His perspective.

He’s already won the race for me.

He’s paved the way, promising to smooth rough roads ahead of me.

He’s done all of this for you too.

Look up this morning and ask God to help you feel the victory He longs to hand you.

Imagine the trophy being placed in your hand.

Imagine the cheers of the witnesses surrounding you.

Determine today that you want to live victoriously,  not as someone who “almost” made it to the finish line.

You are a child of the King if you accept His Son as your Savior.

Nothing can separate you from  His love.

I do not consider myself yet to have taken hold of it. But one thing I do:

Forgetting what is behind and straining toward what is ahead,

I press on toward the goal to win the prize for which God has called me heavenward in Christ Jesus.

When you fully grasp the meaning of these verses,

I promise your view of life will change.