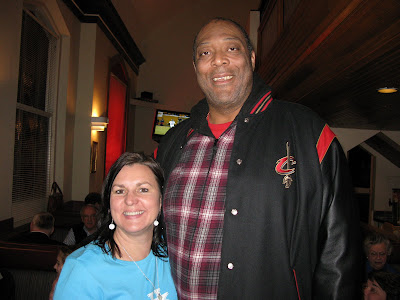 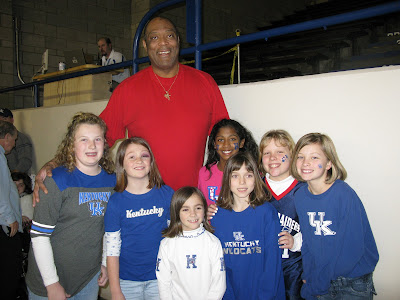 II Peter 3:18
But grow in the grace and knowledge of our Lord and Savior Jesus Christ.
Sunday, Olivia’s basketball team went to Lexington to watch the University of Kentucky’s girls’ team play Mississippi State! (Thank you, Ernie, for the autograph time with the team afterwards!)
While standing in line at the concession stand, we couldn’t help but notice the very tall man ahead of us!
We found out later that his name was Melvin Turpin, and that he was a former player from UK who was half of the powerful “Twin Towers” in his day! As he strolled through the crowd, people would randomly stop him for autographs and/or pictures! He was precious to watch, and I couldn’t resist rounding up some of our girls at one point and setting out to have their picture made. Mr. Turpin was very gracious as the girls all gathered around him.
When the game was over, Tim and I went out to eat with our friends Pam and Ernie and what do you know! Mr. Turpin was in the same restaurant!
I looked at Tim and said, “I just have to have my picture made with him!” There was just something about this man that I adored!
I don’t think it was his heighth although it was impressive.
I don’t think it was his smile although I thought it was priceless.
I think it was the joy I saw him display as he shared himself with so many strangers!
And the fact that he didn’t ask for anything in return!
I truly think he loves coming to the UK games to watch them, but I also think he loves coming to make so many people happy! He is part of UK’s history, yet he doesn’t expect payment for his time or talent. He just simply gives for the pleasure of watching others receive.
Can I say that about myself?
Not always.
Just when I think I may be becoming a “big girl,” God sends a clear message that I have a long ways to go…………………
And looking at this photograph is a visual reminder that I have a LONG ways to “grow!!!”
Needing to be watered daily in His Word,