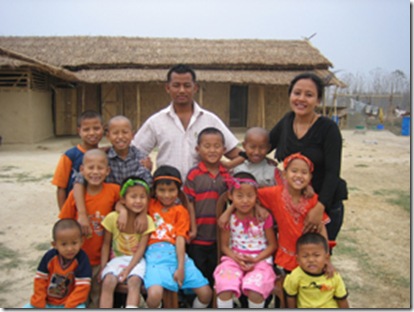 This summer at our family reunion, I was talking to my cousin Ann.  She shared with me about a sweet girl, Shelly, who had come to America and lived with them for some time.  She is now back in India along with her husband and together they have started an orphanage.  Ann and her husband, Bill, help support them and absolutely adore this sweet family.

I have been talking with Shelly through email from time to time and I wanted to share this info with you in case your church or family might want to think about putting together a care package to send to them during the holidays!

Can you imagine the smiles on these kids’ faces as they opened a box of things from America???

I am going to be working on a package here from Grayson for this orphanage as well as one in Romania that I will share about in the next few days.

In Isaiah 58 we are told this:

“If you spend yourselves in behalf of the hungry and satisfy the needs of the oppressed, then your light will rise in the darkness, and your night will become like noonday.  The Lord will guide you always…..”

I wanted to share with you a little about the kids that they care for and ask you to pray about how you can be a part of making their life a little easier.

This information is straight from Shelly and Meren Damsel.

The name of our Orphanage is – CHANAN HOUSE OF HOPE ( Chanan is a word derived from Hebrew kanon which means ‘Gracious’). Just running one year. And we have ten orphans in our children home, four girls and six boys. They are from different community of North Eastern part of India. Here’s a brief background of each of them.

She belongs to Chang Naga tribe. She is from Tuensang Village, an Eastern part of Nagaland. Her father died two years ago, on September 4th 2007, due to the bone cancer caused on his hand. She has her mother who has another four more children and is finding so hard to support her children. Abigail was introduced and brought to the Chanan House of Hope on January 10th 2009.

Obed belongs to Angami Naga. Obed’s father was a drug addict and he died four years ago when Obed was in his mother’s womb. Obed’s mother no longer could nurse her son but rather leaving her son with His grandparents who were not in a position to raise him, she re-married to another man. Obed was brought to Chanan house of Hope on February 4th 2009.

Isaac is from Tamenglong District of Manipur State. He is the second youngest child of the 8 children that late. Pouniamgai and his wife gave birth. His father was an alcoholic and after suffering for long time with lung cancer, he died on June 6th 2006. Isaac mother was a poor uneducated nominal Christian woman, who could not take care of her children. They hardly had one simple meals a day. Isaac was brought to Chanan House of Hope on September 16th 2008. Now Isaac’s mother is no more a nominal Christian but she changed her life accepting Christ in her heart, ever since Isaac joined the orphanage.

Joseph belongs to Sema Naga. Joseph’s father is a Naga militant still alive but he cannot stay with his children at his home. His mother divorced him and run away with another man. She never wanted her children calling her mummy. Joseph never received any love from his mother and he also could not receive his father’s love and care. Joseph was brought to Chanan House of Hope on February 7th 2009.

Samuel is the younger brother of Joseph Phukato.

His mother was a sickly woman and she could not feed her son with her breast milk. She is poor illiterate woman, who collects fire wood from the jungle every day, sell it in the market and buy food for her son. David was brought to Chanan House of Hope on December 10th 2008.

Deborah belongs to Sema Naga tribe. Her father died in the year 2003, due to the kidney failure. Her mother married to another man and could not take care of her. She was brought to Chanan House of Hope on February 10th 2009.

Sarah is from Tamenglong District of Manipur State. She is the eldest child of her parents. Her Father after suffering for many years died on June 12th 2006 due to Cancer sickness. Her mother too was an illiterate poor nominal Christian woman who could not support her children. They hardly had one simple meals a day, but when Sarah was taken to Chanan House of Hope on September 16th, her mother too become a true believer.

Rebecca’s mother died when she was just one year old and her father is a poor blind man who is still alive. She was brought to Chanan House of Hope on March 12th 2009.

Jonathan is from Moriang District of Manipur. His mother died two years back on September 2008 . Right after his mother’s death, his father married to another lady, who never like him or love him, which led even his father to dislike Jonathan by listening to his wife. He was asked by his step mother to take poison and later his own father also asked him to take poison and die and at last the only option for them was to chased him away and he was chased away from his home. None of their relative liked this little boy, every house that he goes to take shelter he was chased away. He was brought to Chanan house of Hope on 17th May 2009.

We have named our Ministry name as – TOUCH OF HOPE MINISTRIES, a faith ministry. Our main theme for the ministry is – HOPE FOR THE LIVING (Eccl 9:4). It is in Dimapur town of Nagaland, but we are 26 kilometers away from the town, the place where there is no electricity and no proper communications etc. Right now we do three things – Orphanage, a nursery school, and Evangelism program. Right now we have only ten orphans, It is because even these ten children we do not have any regular supporters but when God provides and give us sponsors we will have many more. The reason we have started the school is for the sake of our children. It would be too hard for us to support them sending to other School. We are living in the midst of the Tribal Muslims called MEAS. Though difficult, we go to their houses and pray for them and we also share to them Gospel and we try our best to help them in whatevers ways we can.

All these work we do for the glory of God and for the Extension of God’s Kingdom. Please join with us in prayers so that God would bless us more prayer partners and supporters, because we do not have any regular sponsors for our ministry.