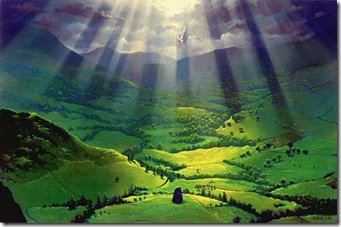 Have you ever woke up in the morning and thought, “I dreamt all night long,”

and then sat and tried to remember your dream.

Well, I did this morning, because I knew that there was something about it that I needed to remember.

See, my dream went from fun to very scary to very desperate to very peaceful.  Now you know I’m not one who normally shares my dreams, so please understand I only do this because it was so vivid and so spiritually moving to me.

It started at church with Olivia and her friends.  We were having fun and there was even a party going on with kids in costumes.  Some of the moms were even dressed up.  At the end of the party, I was taking a few the girls home and somehow we were parked far from the church on a very dark road with huge dogs barking on chains.  We jumped into the car and took off down the road.

I put the radio on KLove-my favorite station-and the girls were all laughing and talking when they broke in on the radio and said for everyone to take cover.  There was an “earth emergency.”  Suddenly, the weather seemed different and as I drove I could see people running everywhere and there were police at every intersection.  For some reason, we stopped at a grocery store and people were running in and out with bags full of water and all kinds of supplies.

Somehow, I lost all the girls.  I tried to call my mom but my cell phone started fogging up and wouldn’t work anymore.

I ran into the parking lot and by now was hysterical.

But He said the weirdest thing.  He said, “Hold onto my feet.”

I remember taking His feet in my hands and wondering if I would see the scars but I didn’t, and I remember that His feet felt like hands in my hands.  He was smiling the whole time.  Then this little boy came running around the corner asking for money and Jesus reached up with His hand and suddenly two dollars appeared.  The boy was amazed and then threw a candy wrapper at Jesus and said something like, “What can you do with this?”

Jesus picked up the wrapper and tossed it towards the boy, but as it fell I remember that it was still a wrapper and Jesus kind-of laughed like He was playing a joke with the boy.  The boy then ran off with the two dollars clutched in his hand.

I also remember that even in the midst of all of this, I let go of Jesus’ feet for just a second to try and call my mom (sorry, Tim, I’m just telling it like it happened).

Then I woke up.

I woke up tired.

I searched the Bible this morning for Scriptures about Jesus’ feet and I found this one that really struck me.

1After the Sabbath, at dawn on the first day of the week, Mary Magdalene and the other Mary went to look at the tomb.

2There was a violent earthquake, for an angel of the Lord came down from heaven and, going to the tomb, rolled back the stone and sat on it. 3His appearance was like lightning, and his clothes were white as snow. 4The guards were so afraid of him that they shook and became like dead men.

5The angel said to the women, “Do not be afraid, for I know that you are looking for Jesus, who was crucified. 6He is not here; he has risen, just as he said. Come and see the place where he lay. 7Then go quickly and tell his disciples: ‘He has risen from the dead and is going ahead of you into Galilee. There you will see him.’ Now I have told you.”

8So the women hurried away from the tomb, afraid yet filled with joy, and ran to tell his disciples. 9Suddenly Jesus met them. “Greetings,” he said. They came to him,

clasped his feet and worshiped him.

I had never thought about the fact that when the women saw Jesus they “clasped His feet.”

If I am happy to see someone, I usually hug them.  I can honestly say I have never “clasped” anyone’s feet when I have met them on the road or in a store.

But in my dream, Jesus said, “Hold my feet.”

I know one thing.  Because I was holding His feet, He was free to help the little boy.  Even in my desperate time of need, Jesus was able to provide for those around me…and somehow still be “fully present” for me.  It was such a special feeling.

And I found it so strange that Jesus didn’t give the little boy a candy bar too?  At first I was so surprised.  But, I felt at that moment like Jesus was saying to the little boy,

“I will provide what you need…and you need two dollars.”

I also know that it was humbling to hold onto His feet.  He almost had to convince me that it was okay.

And because I was holding His feet, He couldn’t walk away from me.

In the middle of a chaos-filled grocery store parking lot where I had lost not only Olivia but also several of her friends….Jesus was there.

I also realized that it took me way too long in my dream to cry out to Him, but He patiently waited until I did.

I’m sure He would have met me much earlier in my dream.  In the dark alley with the barking dogs.  Or on the road in the car with the girls when everything became so scary.

if I would have cried out then He would have brought peace sooner, but I didn’t.

How long will we wait until we cry out to Him?

I also know that when it comes right down to it, the only person I can give an answer for when facing Jesus is me.

And the only person you can give an answer for is you.

We can’t live in fear of the end times even though watching the news may sometimes make us feel afraid.

We can’t live our lives running from everything that is uncertain.

God longs for us to sit down, lean back on our wall of faith, and hold onto Jesus’ feet.

And nothing.  Absolutely nothing should keep us from holding on tightly!

I’m thankful for a dream that I will never forget.