Friday at the high school where I teach, our community came together to help students realize the serious consequences of drug and alcohol abuse.

From judges to state police to ministers, our gymnasium was lined with officials who were ready to explain to the students what would happen to them if the scenario on their slip of paper were true.

Crimes ranged from showing up at school with alcohol odor on your breath to breaking into a pharmacy to steal prescriptions to having a meth lab at your house.

Once students were given their scenario, a volunteer “parent” walked them through the steps that would be required of someone who had committed their given crime.

Many students ended up facing jail time, and I snapped this picture of one of my students not realizing until after I took her picture that her shirt had a peace sign on it.

The opposite of chains…….. 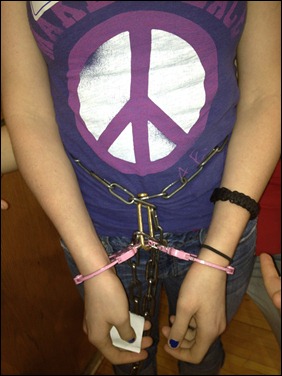 I showed her and her friends this picture and said, “This is what you lose when you end up in jail.”

I know, because every Friday night I sit in a jail cell with women who have traded peace for bondage………………

And they live in regret.

This past Friday night, I challenged the women in pods J and H to write their life story so that they could see the places along the way where they made small choices that pushed them in the wrong direction,

I asked them to try not to blame people along the way but rather note possible obstacles or situations that may have made their bad choices easier to make.

My dream is to see these women’s stories shared with students who are at critical places in life.

There’s something about being in bondage that creates a desire to help others not end up there.

And that’s where the women in jail cells find themselves today.

Wishing they could say to their kids, “Don’t do what I did.  Don’t end up here.”

In reality, all of us are in some kind of bondage from time to time.

Maybe it’s a stronghold of fear, worry, doubt, grief, anger, an inability to forgive, or something else that is keeping up from feeling peace.

I’ve been in bondage many times.

I think that’s one of the reasons I blog.

Hoping to show others the freedom that can be found, even in our darkest times, if we allow Jesus to rule our hearts.

The Prince of Peace.

He longs to release us from the chains this world so easily wants to slip around our wrists.

Last night, we went back to the jail and baptized two more women.  Fourteen women have now given their lives to Christ in our city jail, and the difference it has made in their smiles, their perspective on their future has been amazing.

Watching the women go under the water and then come back up………….

I wish I could express in words the joy that fills our souls and their faces as they realize that have died to the “old self” and have been given the gift of the Holy Spirit to walk with them along their not-so-easy roads.

It’s as if God unlocks their handcuffs and says, “You have now freedom in Christ.”

Today, if you find yourself feeling restrained and held back from being all you can be, I hope you can look at this picture and realize that there is NO PEACE when a stronghold is holding you captive.

Allow Jesus to release you from whatever it is that is holding you back.

I’m praying for you as I head into a very busy week.

You are always on my heart.