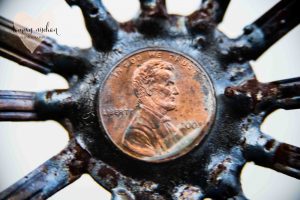 In a world where everything seems bigger and louder than ever before,

I love the thought of a tiny copper coin still having a voice.

but there’s a good chance the total will still end in some sort of cents……..

I don’t know why, but this is powerful to me.

It’s as if my heart and mind know that the very minute I say pennies are obsolete,

Because pennies have power.

One little coin has the ability to stop me in my tracks.

I may be in a parking lot or in a grocery store thinking about a million different things,

but when I spot one,

I see Heaven in a penny.

I see God placing something in my path that gives me permission to slow down.

Just a few minutes ago, as I was writing this very post,

my phone dinged and I saw the words,

“Look what I just found,”

arriving in a text message.

Attached to the message was this picture…… 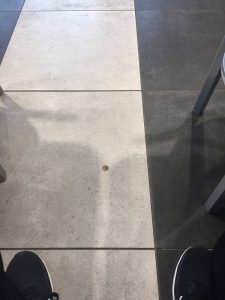 Jon, one of Nick’s best childhood buddies, was

walking on the campus of the University of Kentucky when he

spotted one little coin, and it caused him to stop,

think of Nick……and think of me.

with a short text and a picture of one little coin.

I realized Jon gets it too.

Pennies catch us by surprise.

They send hellos from Heaven.

They remind us that joy will never be found in wealth.

Joy is found in slowing down enough to notice all the little things along the way.

Pennies can do even more than that………

They can also remind us of our past.

Designed by Benjamin Franklin in 1787, pennies were the very first form of currency authorized by the United States.

Almost 200 years later, an image of Lincoln was added to the coin along with the words, “In God We Trust,”

making it the first piece of money to ever bear these powerful words.

because in this big, loud, busy world………

”Stand by the roads, and look,

and ask for the ancient paths,

where the good way is;

and walk in it,

and find rest for your souls.