Written by a friend after Nick’s death…… 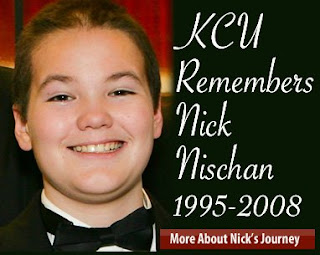 THE FOLLOWING ARTICLE WAS WRITTEN BY LARRY MARSHALL, THE ALUMNI DIRECTOR AT Kentucky Christian University where my husband is a professor.

I WISH I HAD KNOWN
NICK NISCHAN

From the title, I assume you know from the outset that I never actually met Nick Nischan. His family arrived at my alma mater just after I graduated, and I only casually met his dad on random visits back to the university. But where the title of my thoughts tonight might mislead a bit is that I feel like I know Nick Nischan, especially after the events of the past few days.

Nick’s funeral celebration was this afternoon in a crowded church of family and friends. His battle with brain cancer for the past 6 years of his life has been well documented in this little corner of the the world, though his influence has gone far beyond Eastern Kentucky.

For the past several years before I arrived back at my alma mater to assume employment, I had heard about this kid named Nick. What set him apart was not that he was dealing with a sickness that was robbing him of being, in a physical sense anyway, what any 13-year-old boy wanted to be. But words that I had always heard were “courageous,” “inspirational,” “brave.”

After the events of the past few days, I can only assume that was all true. As I sat through the funeral – which was actually more of a celebration service – I heard those descriptive words used over & over again by the several who spoke at the service. I can’t imagine the funeral service for one of my own children. But to actually get up and speak…..remarkable. And yet, both Dad & Mom took their turn. I wish I could script out for you their words….it was beautiful, well-said, and very touching. I’m beginning to sense that this remarkable little boy was one of those “apples that didn’t fall far from the tree” as they say. Nick’s mom, Tammy, is a prolific blogger, and has been documenting this 6-year journey at http://www.tammynischan.blogspot.com/and it wouldn’t surprise me if she posts the manuscripts of both her talk and Tim’s. If you get a chance to read some of her posts, it won’t be a waste of your time.

The service itself was as unique as the life it commemorated. The four-piece band did an instrumental version of Audio Adrenaline’s ‘Big House’ as a prelude. I didn’t put two and two together at first. But if you know the song, the lyrics refer to the “big, big house, with lots & lots of room…with a big, big yard, where we can play football.” Nick was a huge football fan, and reference was made later in the service to Nick playing football in that big, big yard at his father’s house. I don’t know if the Audio A guys ever dreamed that song, or any of theirs, would be used at a funeral. But it was perfect. In fact, it was used as an invitation song at the end. Again, this won’t show up in any handbook on how to perform a funeral (neither would the video tribute to Nick sent from Chuck Norris!). But Nick’s life was celebrated tonight much like it was lived. Full of life. Taking advantage of every opportunity and every moment. Pointing to Jesus all along the way.

I never knew Nick Nischan. But in a whole lot of ways, I feel like I know him now. I just wonder if any of us will leave a legacy after we’re gone like this 13-year-old inspirational young man.

Below is a link to a very good article written by our college president about Nick and his family’s journey. (You may have to copy and paste the web address below into your web address line in order to get to the story.)