When Faith Seats Us At The Table

Thirteen years have passed since Joseph was sold into slavery by his brothers.

From becoming the personal attendant to Potiphar to being thrown into prison by this very same man,

Joseph has learned that his confidence should never be placed in the hands of men.

So when Pharoah calls for Joseph to interpret a dream,

two years after the baker is spared from death and supposed to save him too,

Joseph surely wonders who in the world really cares about his existence.

I wonder what is going through his mind as he shaves and changes clothes,

preparing to stand before the man who rules all of Egypt.

I often wonder why the Bible leaves out these emotional details.

It’so tempting for me to read between the lines.

But maybe that’s what God wants us to do.

Fill in the blanks with whatever we might feel.

And quickly discover that all emotions

ultimately lead to Him……

If He’s the One we trust.

As he stands before Pharaoh and hears the words,

“I have had a dream, and no one can interpret it.

But I have heard it said about you that you can hear a dream and interpret it.”

Joseph doesn’t hesitate to answer with words I would have been terrified to speak,

Joseph’s first words are the very last words Pharaoh wants to hear after a fitful night of sleep,

but Joseph says them anyway.

And maybe Jacob, the deceiver, has finally learned his lesson.

Somehow after being thrown in a pit, sold by his brothers, and imprisoned for false charges,

And risks being whisked away to death by speaking the truth.

I love that immediately after hearing these words,

Pharaoh begins to tell Joseph the details of his dream.

Pharaoh knows what Joseph has maybe struggled to believe.

God is with him.

All along the way.

God has been leading to Joseph to this moment.

As he stands before Pharaoh and learns that he is going to be elevated to the second highest position in the land,

does he have flashbacks?

Is there a montage playing through his mind?

His brothers slowly fading into the distance as he is carried away.

Does he remember the cupbearer and the baker’s dreams and wonder if even his time in the dungeon was part of God’s plan?

During this time, Joseph is given a wife and has two sons of his own.

Are there ever nights when he looks off into the distance and wonders if his family is out there?

Missing him? Worried about him?

Does his first dream haunt him?

Will the day arrive when his eleven brothers and father actually bow down to him just like the sun, moon, and eleven stars did in his dream?

Faith isn’t mentioned in the pages of the Bible yet,

but Hebrews 11 says Jacob walked by it.

his brothers have arrived.

Joseph is fully aware of who they are.

But isn’t quite ready for them to know the same.

I’m not sure why he drags out the revelation of who he is,

And be sure of their changed hearts.

It’s a whole other thing to believe they love you.

So the pause button is pushed with Joseph having washed away his tears in a private room.

And returned to the table where he has had his brothers seated in order of their age.

The table is set for all things to be made right.

And maybe that’s true for us today.

And we haven’t quite realized it yet.

And changes everything about today.

This was true for Joseph.

And it’s true for us too.

Even in our deepest moments of grief,

faith makes a way for us to live with overflowing hope.

Faith has set the table.

And we are seated there. 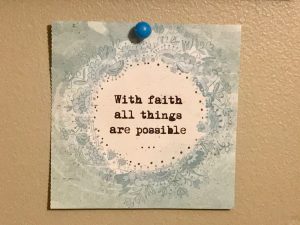