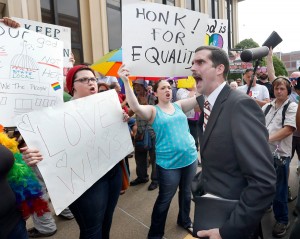 The playground is filled with children.

Life is good on this particular school day……………until someone gets hurt.

Someone has taken a game of kick ball too far and blood now marks the place where little feet once stood.

Rocks begin to fill the air as children lash out at the injustice in the game.

Chaos breaks loose on a beautiful day in a place created for happy memories.

Suddenly, as if it is the only option in self-defense, sides are chosen.

The teacher surveys the area, trying to decide where to focus her energy when she notices a couple of students quietly standing to the side.

Mouths silently moving in the shape of words.

As she gets closer she realizes they’re praying for peace.

No words about anyone paying a price.

Or taking the blame.

No screaming for the teacher to see things the way they do.

They’re just praying for the ones with blood on their faces….

on both sides of the playground fight.

History is being made in the tiny town in which I live.

Grayson, KY, has drawn the likes of NBC, CNN, and even presidential candidate Mike Huckabee.

I’ve even heard that a group is coming who is against both sides in this unfolding drama.

Many parents are afraid to send their children to school tomorrow as our town has literally turned into a circus act of people screaming for all sorts of different freedoms.

At this point, only words are being hurled;

but when heat reaches a boiling point the reaction always changes even the calmest of water.

And here I sit.

In my TV room with the TV off.

The screaming has gotten the best of me.

The shouts for the world to see things a certain way.

I feel drained, and I haven’t even been the one taking a stand.

I’ve talked this whole thing through with my husband so many times that I’m sure he’s tired too.

I’ve wrestled with where I would be sitting today if I were Kim Davis,

because the truth is there may come a day when I’m in a place where what I believe about some issue pushes me up against a wall that seems to have few options.

I’ve wrestled with where I should be standing today in a debate that has so many layers of beliefs and convictions.

I’ve found myself asking this question and coming up short,

Is there a line to be drawn in the sand?

In times like this, I find myself thinking about the now-cliche’ words etched on a bracelet worn by many just several years ago,

What Would Jesus Do?

He actually faced a very similar situation one day.

Angry men hurled an adulterous women at his feet and demanded judgment.

“Teacher, this woman was caught in the act of adultery. In the Law Moses commanded us to stone such women. Now what do you say?”

Many would have jumped at this chance for power.

Instead he bent down and began writing something in the sand.

I’m glad we don’t know what it was, because I think the focus of the story would have shifted to His words instead of His actions;

and I believe this story is all about His actions.

Whatever He wrote while bent down low caused the crowd to think.

After writing for a while, He stood up and said words I think we all need to hear today,

Let any one of you who is without sin be the first to throw a stone at her.

Upon hearing these words, the crowd began to leave, and I love that the writer of the story includes the phrase,

“the older ones first.”

There are a lot of younger people watching older people today, wondering where we stand and how we’re going to handle the drama of this story.

Like children on the playground praying for the injured,

I think there needs to be a lot more of us holding hands and whispering prayers for the injured.

And there are injured on every side of this story.

God is big enough to handle this.

For those who compare Kim Davis to Daniel in the lion’s den,

He just needed the presence of God.

For those who stand on the other side of this story,

put your stones down too.

Yes, there are rocks available to all of us today;

And just hold hands and pray.

Because I don’t know about you, but if the guilty deserve to be stoned; I should be the first in line every single day.

The LORD will fight for you; you need only to be still.

One thought on “Put Down Your Stones”