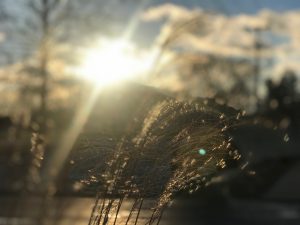 It’s only been a year since the Israelites left Egypt.

They’ve donated supplies for the building of a temple

and offered sacrifices for the many reasons they’ve fallen short along the way.

They’ve been counted and recounted

and learned where their tribe falls in line when the time comes to pack up and move.

It’s been a bloody year.

And in some ways,

So this morning I’m wondering,

“How often did Egypt seem easier?”

surely had its own set of perks.

Did they ever whisper at night about the things they missed?

Or was there fear of even their soft voices bringing destruction?

I don’t like to think they were afraid of God,

but part of me knows they were.

And a bigger part of me knows firsthand

that freedom from bondage rarely means “easy street” has arrived.

I’m thinking of the words of an angel many years later,

“Do not be afraid, Mary.  You have found favor with God.”

Did she remember these words as she knelt weeping at the foot of the cross?

Did she feel favored as her Son died for the sins of all the world?

I’m sure her heart was torn in two,

but I have to believe she somehow knew this was part of God’s big plan.

And He chose her because she would accept it.

Even when it hurt.

I’m sure, if asked, she would have said,

Being chosen doesn’t always feel that great….but it’s worth it.

This morning, I was surprised when I realized the Israelites were just beginning their second year of wandering in the wilderness.

I’m tired for them.

But I’m inspired too.

Those are the words He’s stopping me on today.

The Israelites followed even when Egypt seemed easier.

The Israelites worshiped even when they were confused or scared.

The Israelites sacrificed even when it demanded giving up their very best.

Mary worshiped God even when He took her son.

On and on the Bible tells of people who keep pursuing God even when they do not understand what’s happening.

I want to be an Israelite today.

I want to be Mary.

I want to be someone who keeps moving closer to Him

even when it’s hard and confusing.

I want to be someone who turns to Him for help

even when I have before and, in an earthly sense,

have felt let down.

even when the timing is uncertain.

I’m so thankful for the Old Testament.

even when it wasn’t easy.

but they followed even when it didn’t.

And I will too.

But you are a chosen generation, a royal priesthood, a holy nation,

His own special people,

that you may proclaim the praises of Him

who called you out of darkness into His marvelous light.

We are a chosen people.

Some days it may not feel that great.

But we’ve been called out of darkness

into His marvelous light.

The Promised Land is coming.

And today, the Creator of the Universe is with us.

Leading the way as we carry out the tasks before us.

What more could we need than His presence?

It was more than enough for the Israelites.

And it’s more than enough for me.

Tammy Nischan Comments Off on The Power of “Even When” Faith