Because Stories Can’t Be Shared Until He Writes Them

How often did Abraham retell his story?

Sitting by the gate of the city

(or wherever men gathered to chat in Old Testament times),

he surely rehashed the details time and time again.

It’s a story that would make headlines today.

And I have to believe the details of that particular experience

replayed in Abraham and Isaac’s heads

the rest of their lives.

and then left for the airport.

It’s a section of the Bible that gets me every time.

Because I remember God asking me to do a very similar thing.

“Lay down your son, Tammy.

Trust me with him.”

I had hoped I would have WiFi

while waiting for my flight.

But God has a way of pushing pause on our plans

when He needs more time to finish His.

As I stood in line to load the plane,

I had no idea the story of Isaac

would forever come to mind when I remembered this moment

at a very different kind of gate.

I turned to talk to the two young ladies behind me while we waited.

And quickly learned one of them was flying for the very first time.

I wished her well as we boarded and then headed for a window seat.

It’s been a long week,

and I planned to take a nice nap on the way to meet Tim.

Within seconds, though, I heard one of the girls

call from the other side of the aisle,

I laughed and said,

“I won’t be much company. I’ll probably fall to sleep!”

But she quickly replied,

“I have a shoulder if you do!”

As the flight began,

so did the small talk. 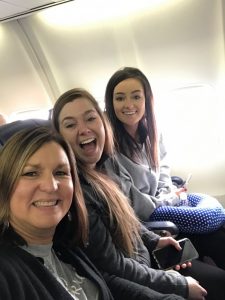 Occasionally I closed my eyes,

but the energy of these girls was something no one

would want to miss.

Time passed and the casual conversation turned to deeper things.

Before we knew it,

our phones were out and we were sharing pics of family members.

I still can’t introduce my children without including Adrienne and Nick,

so I briefly told of how SIDS and brain cancer were part of our family’s story.

As I shared about Nick,

the spunky girl sitting next to me,

Last month she lost a dear friend to the very same disease.

She shared his story with passion

and as she talked, I noticed her bracelet.

She wore her brain cancer story for the world to see…..

right on her wrist. 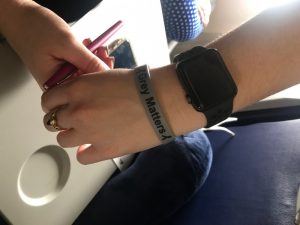 And now she was sharing it with me.

She cried as she talked about this friend’s father

and how he has questioned God ever since his son passed away.

As the flight continued,

she moved to the story of her own father.

Years ago he was seriously injured

when a co-worker backed a vehicle off the assembly line…….

and right over him.

Crushing bones all along the way.

Tears ran down her face as she told about her dad seeing this accident as a wake-up call.

At one point she said,  “My dad told me he needed that truck.”

I couldn’t help but wonder how many times I’ve needed one too.

Something to stop me.

Remind me of what truly matters.

One story led to another and by the time the two-hour fight ended,

we were friends for life.

The shoulder we both needed this morning was definitely not for sleeping.

In so many different ways,

today has “flown” by.

I’m in our room at Tim’s conference,

and I’m finally able to process all that has happened since I read Genesis 20-23 over twelve hours ago.

I’ve read the story of Abraham and Isaac so many times.

A father who was asked to give up his son.

A father who surely questioned God along the way.

And a father who shared the story of his wake-up call over and over again so others could be woken up too.

I’ve read this Old Testament story so many times,

but this morning I lived it.

in the most unexpected ways.

at the most perfect times.

And humbly aware that a story can’t truly be told until God writes it. 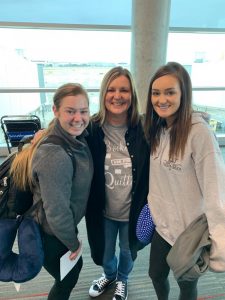