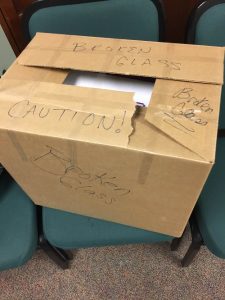 “Behold, he has hidden himself among the baggage .”

I wonder what the Israelites thought as Samuel presented their long-awaited king and then discovered he was hiding.

Saul had already been anointed king in a private ceremony.

He knew what was coming as Samuel slowly narrowed down the tribes in order to reveal their new leader.

But he hid anyway.

Saul, a man who the Bible says stood “a head taller than anyone else,”

had crouched down behind suitcases and supplies as his name was announced as king.

There aren’t a lot of other details in this part of the story.

In a way, it makes the moment even more awkward.

Saul doesn’t step out into the crowd and explain why he was hiding.

He simply steps out after God reveals his hiding place,

“Do you the see the one the Lord has chosen?

There is no one like him among the entire population.”

And the people begin to shout,

If this story were part of a comedy,

A tall man hiding behind a stack of suitcases,

stepping out to the words,

But this is the story of Israel’s first king,

hand-picked by God for such an important role.

I can’t help but relate to Saul.

Hiding behind baggage is so much easier than stepping out and being seen.

I hide behind a suitcase or two almost every day.

“Courage starts with showing up and letting ourselves be seen.”

“Because true belonging only happens when we present our authentic,

imperfect selves to the world,

our sense of belonging can never be greater than our level of self-acceptance.”

I think Saul knew what he didn’t want the Israelites to know.

And ruling a nation was not something he felt equipped to do.

Saul forgot God had the power to fill in all the gaps.

God was able to do all Saul could not do…..

if only Saul would step out from behind his baggage and trust in God.

In what ways do I need to step out from behind my own baggage and be fully seen?

Am I willing to trust in God after I do?

These aren’t easy questions to answer,

and there’s a suitcase or two separating us from the very thing He longs for us to do?

Trust Him to do the rest.