So close and yet so blurry…….. 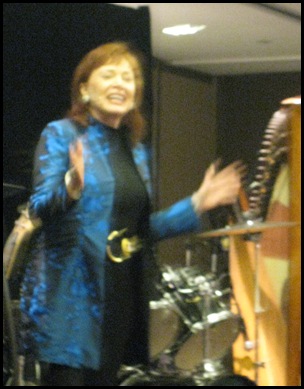 This is pretty much how my memory of sitting in a Carol Kent event on Thursday is in my mind…very blurry.  Somehow we had seats at the table right next to hers!  I couldn’t believe it! I had been looking forward to this day for months and months..ever since I heard that she was speaking at the North American Christian Convention.  However, I entered the luncheon heavily medicated with NyQuil and Mucinex and was struggling to speak more than a whisper to the friends at my table.  I remember jokingly saying to one of my friends that I thought this was God’s way of saying, “Today, Tammy, I want you to listen…not talk.”

See, Carol wrote the book When I Lay My Isaac Down, which tells the story of her journey with her only son and his eventual life-sentence in prison for the murder of his wife’s ex-husband.  I read this book last summer after my friend Topsy gave it to me as a birthday gift.  Although Carol’s journey was not with cancer, God quickly reminded me that our journeys in many ways were very similar.

See, while Nick was going through chemo, I did the Beth Moore study on Daniel by watching DVDs in Nick’s hospital room and going through the workbook on my own.  Last summer, our Sunday school class did this same series and I chose to simply use my workbook from 2006 and jot my new notes beside my old ones.

As I was reading Carol’s book and her heartache upon hearing that her son was being sentenced to life in prison, I reached the day in my Daniel Bible study where Beth Moore had asked this question after sharing about the importance of Nebuchadnezzar’s dream:

What dream have you had recently that woke you up with a start?

Last night I dreamt that Nick was sentenced to life in prison.  I was screaming as they took him away from me down the long hall of prison cells, but he looked back at me and said, “It’s okay.”

As I read these words afresh in the summer of 2008 while Carol’s book lay next to me, I knew deep inside that God had given me that dream in 2006 for such a time as this.

He spoke to me in a powerful way that day and Carol’s book meant so much more to me than I ever thought possible!

So, hearing Carol in person was a dream come true!  And I’m just guessing that the devil knew how much it meant to me, because he attacked my health so quickly that I cannot even believe it now.  As I looked through my pictures from the conference, it was apparent that on Thursday, I was not myself.  I clicked a few blurry photos, but I never even attempted to talk to Carol or try to take a better picture.  I was just too sick.

So, I share this simply to say that for some reason it was not my time to speak to Carol.  It was only my time to hear her words, which I’m going to have to listen to again on CD when I’m fully alert.  (I realized very quickly that I was not myself as she was speaking and I noticed friends all around me beginning to cry while I sat numbly as an observer.)

Carol is a beautiful person with a beautiful message, and I recommend wholeheartedly her book for anyone who is being called to any level of parental loss. 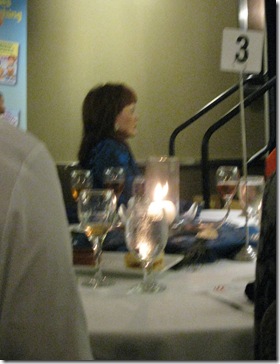 This is Carol at the table next to me.  I was sitting THIS CLOSE to her and was absolutely too sick to even try to communicate with her. 🙁

Thankful that one day all of the blurriness of this world will be made clear,