The Power in a Name

Philippians 2
9Therefore God exalted him to the highest place and gave him the name that is above every name, 10that at the name of Jesus every knee should bow, in heaven and on earth and under the earth, 11and every tongue confess that Jesus Christ is Lord, to the glory of God the Father.
Well, this afternoon and evening have been kind-of “different.”
I came home from subbing-HIGH SCHOOL!- and was so emotionally drained! Don’t get me wrong, I LOVE kids! I just get so burdened by their stories, their behavior, their lack of motivation……not all of them, but enough to really get me on my knees.
Just minutes after walking in the door, our oldest son Erich showed up from college for help in getting his letters ready to send out about his summer medical mission trip to Kenya, Africa-I forgot he was coming!
One of my dear friends came by to help with some work on Nick’s foundation. So much is moving along so quickly! We are thankful and overwhelmed at the same time!
One of Olivia’s friends came home from school with her because her mom had a doctor’s appointment and for some reason they decided to see what would happen if they mixed things together like a frozen banana, baking soda, vinegar, dishwasher detergent, spices……..and just late tonight I learned that bleach was also involved! YIKES! Olivia! You just can’t mix some things……..it is dangerous! I haven’t even looked outside to see what they left on the picnic table-why do I just know it will sit patiently til tomorrow?!
Todd had tennis practice so I had to work in running him back to the school.
Tim had an elder’s meeting after church, so our evening seemed a little extra long.
Finally, things wound down. American Idol was over. (My favorite is still Danny from last week! I’m hoping he ends up going “Christian-music” style! He’s a worship minister, and every time he sings I get goose bumps! ) Tim and I watched “Life on Mars”- a show we started watching with Nick last fall about a guy who was in a car wreck and somehow ended up 35 years in the past.
Finally, everyone in the house is asleep except for me-
I needed just a little quiet time before heading to bed.
I’m trying to stay faithful to reading through the Bible in a year and I LOVE my “One Year Chronological Bible.” It has really kept me focused…..and when I get a little behind, I can’t pretend I didn’t know…..the date is right there in front of me reminding me of where I should be!!! So, in the quiet of the late night, I read my chapters for today and I have to be honest…..Leviticus freaks me totally out! I have had some serious prayer time asking God to help me! I’ve just come right out and said, “I think so much of it is creepy.”
Animal sacrifices, awful sins, bizarre laws….
I need to make an appointment with one of the Bible professors at KCU where Tim teaches. I have sooooo many questions!
After reading my day’s Bible text, I decided to dive into another chapter of this great book I’m reading called, A Grace Disguised. The author shares his journey through grief after losing his mom, wife, and a daughter all in a car accident. It is such a great book, and on so many levels I feel comforted by his journey. Thank you, Jerry Sittser, for sharing your story!
At last, I thought, “It’s time for bed!”
Then for some reason I thought I might write a little that I learned from the book so I decided to open my blog.
As I read a comment from two posts ago, I discovered that Beth Moore’s blog (which I have only visited once in my life several months ago) had a post about the academy awards too, so I decided to pop over and read it.
Different perspective than mine…….but I enjoyed the words so much.
Then it happened. I scrolled down to read the next entry and saw photographs of Beth Moore holding a tiny baby girl. I am a huge Beth Moore fan, and I did not know that she now had 2 grandchildren!!!
But the part that really struck me was that this new little addition….Beth’s first granddaughter….is named Annabeth! It just about took my breath away, because I had never heard that name before we had our daughter Adrienne….
Her middle name was Annabeth (after my middle name “Ann” and my sweet little friend/sister “Beth” from my home church).
So, I guess just reading the name “Annabeth” really affected me. 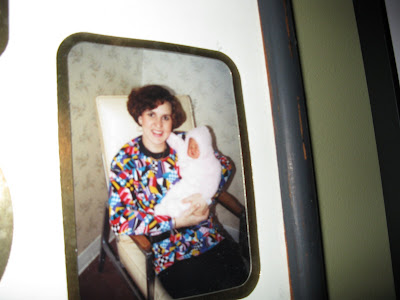 I just loved Adrienne’s name so very much! 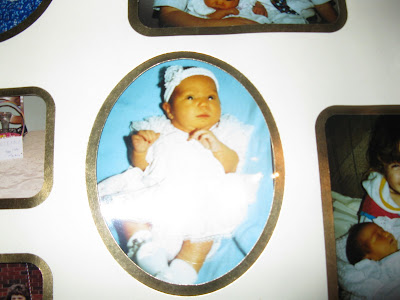 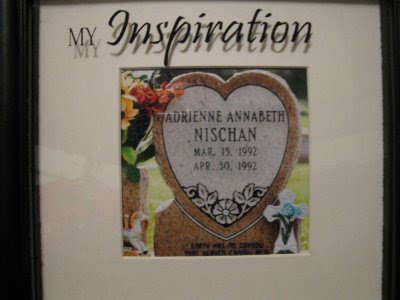 Adrienne Annabeth……
Through all of these emotions that have been stirred in me tonight, I have been taken back to an experience I had while subbing today.
See, there was a boy named “Nick” who played football with our Nick. He’s such a sweet boy. I had him as a student in 6th grade.
Well, the night of Nick’s visitation just as the four-hour service was ending and the last of over a thousand people had walked through our church and shared the evening with us, the middle doors opened and this sweet Nick came walking towards me still in his basketball practice clothes. His mom said, “Nick was so afraid he was going to be too late.” With his hands wringing each other and his lip trembling, he hugged me and talked to me and my mom for a few minutes. I told him how much it meant for him to be there for me.
Today, I had been in the same classroom for nearly an hour and a half when I decided to go downstairs and get some crackers for lunch. As I entered the hallway, I said “hi” to a girl student who was walking by. As I kept walking, I heard her say, “Mrs. Nischan,” and I looked back. She said, “Just a minute. Nick wants to say “hi.”” And sure enough at the other end of the hallway was this same sweet Nick! He came walking towards me and my eyes just lit up!! I hugged him and he said, “How are you doin?” I told him I was good. I said, “Taking one day at a time and trying to stay focused on the important stuff.” Then I pointed up. He said, “I love you,” and then he went his way and I went mine.
But I have to say that that brief moment meant the world to me………….so much so that I texted my mom to share it with her.
In my text I said, “In some ways, I can’t believe his name in Nick and in other ways I can’t imagine that his name could be anything else!” Mom replied, “It has to be Nick!” And I think she’s right. His name just has to be Nick. He is a little last minute gift from God! An earthly comforter for some reason.
And I never would have shared that memory had I not written about the academy awards and then had a friend share about Beth Moore’s blog and then read about her granddaughter named, “Annabeth.”
There’s power in a name.
The Old Testament spends so much time sharing the meaning of people’s names, the changing of people’s names, the importance of people’s names.
God loved names, and I believe He still does!
I know the emotions that surge within me as a mom at the mention of my children’s names…….
and I just have to believe that these emotions are multiplied to the greatest power imaginable by God when it says in the New Testament that….
at the NAME of Jesus every knee shall bow!
WOW! Now that’s a powerful name!
So tonight, I have officially rambled my way through my afternoon and evening’s lack of anything really exciting…………
Besides the reality that God has been with me every step of the way and that in some small way I think He wanted me to know about a new little “Annabeth” tonight, and
I think He wanted me to reflect on the sweet comfort I felt today in the presence of a boy named “Nick,” and
I think He wanted to remind me that in spite of my fatigue, my grief, and my ever-increasing list of questions concerning the Old Testament…….
there is ABSOLUTE, UNDENIABLE POWER IN THE NAME OF JESUS CHRIST OUR LORD AND SAVIOR.
Wow! What an ending to a very different kind of afternoon!
Forever Amazed at God’s Ability to Speak and So Thankful for the Power in His Son’s Name,