The Thing About Covenants 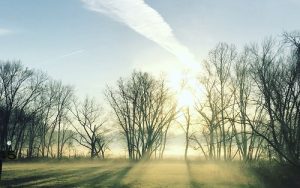 Since the beginning of time,

God has been in the covenant-making business.

Working with imperfect people to complete a perfect plan.

He started in a garden.

With a couple who for all practical purposes “had it made.”

Stepping over the one little line God had drawn in the middle of endless beauty.

And forever loosening the perfect bond they had with their Creator.

And eventually, the connection between God and man had nearly broken.

No longer were men turning to Him for a relationship, for help, for companionship.

They needed something to hold, to see, to worship.

So false gods became the norm.

In the middle of an evil world, He still turned to God.

If something didn’t change,

the human race would quickly destroy itself

with greed, envy, lust, and all sorts of other wickedness.

With a broken heart,

God made a plan.

And after the flood,

He made a covenant.

“Never again will I destroy the world by water.”

Time passed and people quickly forgot the One who was able to create and also destroy.

And God needed a way to connect with man that involved reminders.

He had to reintroduce Himself by calling out a group of people who would continue reintroducing Him generation after generation.

A family line that would be set apart.

I’m not sure what was included on the list of qualifications for this particular calling,

but Abraham must have had enough of them.

Or at least been the closest candidate available at this time in history.

So God reached out.

It’s almost as if He created the classic relationship starter……..

God never forced the world to love Him.

So the covenant relationship began.

And God proved that when He makes a promise,

Strayed off the path.

And time and time again,

His cast of covenant-bonded people was no different than the Ones He works with today.

And Rachel and Leah will soon join this list with their own set of imperfections.

But God never gave up.

He persistently pursued the ones He had chosen.

Making a way even when the chosen got in the way.

Perfect love was trying to break through to an imperfect world.

It would be a while, though, before this broken planet was ready for Perfect Love to show up.

When I was nine, God ask me the same question.

I didn’t hear His voice or see a burning bush.

I just heard a sermon.

And felt the nudge to walk down the aisle.

Make a covenant of my own with the very same God who spoke the world into being…..and has tried to be heard by it ever since.

I’ve fallen short many times along the way.

But I’m so thankful for a God who also wants to be my Father, Savior, Protector, Redeemer, and Friend…..

Just like the men and women in the Old Testament story,

I made a covenant with God.

And my life forever changed.

That’s the thing about covenants I love.

Fear not, for I am with you;

be not dismayed, for I am your God;

I will strengthen you,

I will help you,

I will uphold you with my righteous right hand.