What To Always Remember When Jesus Seems Late 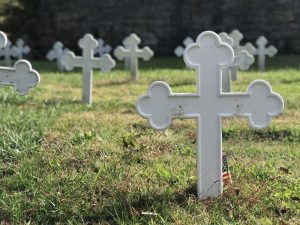 I can see him in my mind.

A synagogue ruler in his community.

A desperate father in the crowd.

His daughter, deathly sick, needs more than medicine and Jairus has heard Jesus is in town.

Pushing through the crowd, he has one thing on his mind.

A miracle from the miracle worker.

As he approaches Jesus, he doesn’t take time for informal introductions,

he simply blurts out the one sentence no parent ever wants to say, “My little daughter is dying.”

He then asks Jesus to come to his house, put His hands on her and take away her sickness.

Jesus doesn’t respond in panic, pick up His pace, or change His plans.

As He makes His way through the crowd, though, something happens.

A woman, in need of a miracle for many years, reaches out for the edge of His cloak.

Jesus, feeling power leave His body, turns in search of the person responsible for this sensation and takes time to address her faith.

All the while Jairus’ daughter is slipping away.

I know firsthand the horror they were feeling as they stood around her bed.

A miracle was needed.

But the One with the power was too late.

And Jesus was still in the crowd,

healing a woman who was bleeding.

Could anything be more urgent than a dying child?

“Why bother the teacher anymore?” his friends say out loud as they bring the bad news,

“Your daughter is dead.”

But Jesus stays calm even in this moment.

Death does not seem to scare Him.

As a matter of fact, He looks at Jairus and says,

“Do not be afraid; just believe.”

I’m not sure how long it took for Jesus to finally make His way to Jairus’ home,

but Scripture says He continued on His way only allowing a few disciples to follow.

Upon reaching their house,

He enters the little girls room and with the words,

brings her back to life.

One sentence from a late Jesus and Jairus’ family exchanges their mourning for rejoicing!

Things aren’t quite the same today.

I wish they were.

I wish desperate moms and dads could still push through crowds

until they find the One who holds the power

to save their children.

I wish one sentence could reverse the sting of earthly death.

For many, including me, it can easily feel like Jesus was too late.

Missed His chance to show His power.

And even healed some lesser illnesses along the way for others.

Sometimes Jesus is on time.

And sometimes He seems late.

But I’m so thankful the story didn’t end with Jesus walking on this earth.

I’m so thankful His footsteps ultimately led to a place where He became fully acquainted with grief,

forever changing the pain of this world with another powerful sentence.

In that moment, Jesus was on time.

Every sick child from that day forward may not receive an earthly healing but they are guaranteed an eternal one.

Death was conquered once and for all.

The month Jesus seemed late for our family.

I love to imagine the joy in Jairus’ home as they watched their little girl sit up.

I can see Jesus smiling as He shares in their joy.

A joy like none other this world can offer.

Their daughter was dead.

And now she is alive!!

Could anything feel better???

I’ll hug his neck and thank Him in person for the miracle of the resurrection.

I hope He’s bracing Himself for that moment.

but He was actually on time long before we needed Him to be.

“I am the resurrection and the life.

Whoever believes in me,

yet shall he live,

and everyone who lives and believes in me shall never die.”

He was actually early.

I’m so thankful He knew what our family needed long before we dared to ask.

“Lord, heal our child,” was our daily cry.

“I already did,” was His faithful reply.