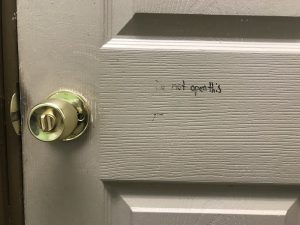 As I left the less-than-lovely gas station bathroom,

the words “Do not open this,” caught my eye

on the less-than-lovely bathroom door.

Part of me wanted to listen.

But I knew the only way out involved taking a risk.

And I knew the message written beside the knob was not written with my best intentions in mind.

In a gas station bathroom.

So, using a paper towel to separate myself from any possible germs,

I turned the knob and released myself from the confines of a space I had been in long enough.

But not before taking this picture,

long before I knew what He was trying to say.

I began to understand the message.

I was reminded of the miracle of Moses’ life.

So many times doors were closed,

as if the devil had written “do not open this,”

on each of them,

in an attempt to stop God’s plan.

Bring an end to the salvation of the Israelite people.

Put a stop to a Providential promise.

This was the command of Pharoah when he began to fear the growing number of Israelite people.

There she sat, holding baby Moses in her arms.

“Opening the door” meant risking her life to save her newborn son.

Turning the knob was risky.

But she did it anyway.

and figuring out how to make it waterproof without the help of Google,

she placed Moses in the Nile.

Opening the door to a terrifying chapter in motherhood,

and trusting her child to the God she loved.

Would Moses be saved?

There was no way to know for sure.

Miriam watched from the distance as her brother floated away.

And another woman quickly entered the story.

Pharoah’s daughter, bathing as royalty often did in that day,

heard the cry of a baby and made her way to the basket.

Realizing the infant boy was a Hebrew,

she surely heard the words,

ringing in her head.

This is just too risky.

But something caused her to reach for the knob…..

and walk into a chapter of life unlike any she’d ever walked in before.

(A son of Pharoah by adoption,

but a Hebrew by birth.)

As he walked one day, he saw something that didn’t seem right.

An Egyptian was mistreating a Hebrew slave, and

Moses found himself filled with anger.

“Do not open this,” surely rang through his head as he turned the knob,

killing the Egyptian then hiding his body in the sand.

This door proved to be dangerous and sent Moses running for safety.

Some doors lead to the wilderness.

And Moses had opened one of them.

I’m sure he beat himself up for turning this particular knob,

Moses found his way to love in the desert,

marrying Zipporah and becoming the son-in-law of a priest.

Many years passed by, and all the while, Moses faithfully worked the fields for his new family,

never expecting to lay eyes on a burning bush,

much less hear the voice of God coming from it.

It was a moment made for movies

trying to make the best of a bad decision,

having an encounter with the Father of Abraham, Isaac, and Jacob.

“I have heard the Israelites’ cry for help.

And I am sending you to Pharoah so that you may lead my people out of Egypt.”

Did Moses hear the words, “Do not open this,”

as he stood at this door that would lead him back to the very place from which he had tried to escape?

We stand at a door that for all practical purposes feels wrong.

Reaching for the knob means things will never be the same.

And the unknown life on the other side seems more frightening than the known life we are in.

I’m sure part of him wanted to listen.

DO NOT OPEN THIS.

But Moses knew what I knew in the gas station bathroom –

the only way out involved taking a risk.

And He knew the message written beside the knob was not written with his best intentions in mind.

What door are you afraid to open today?

If God is nudging you,

right on the other side.