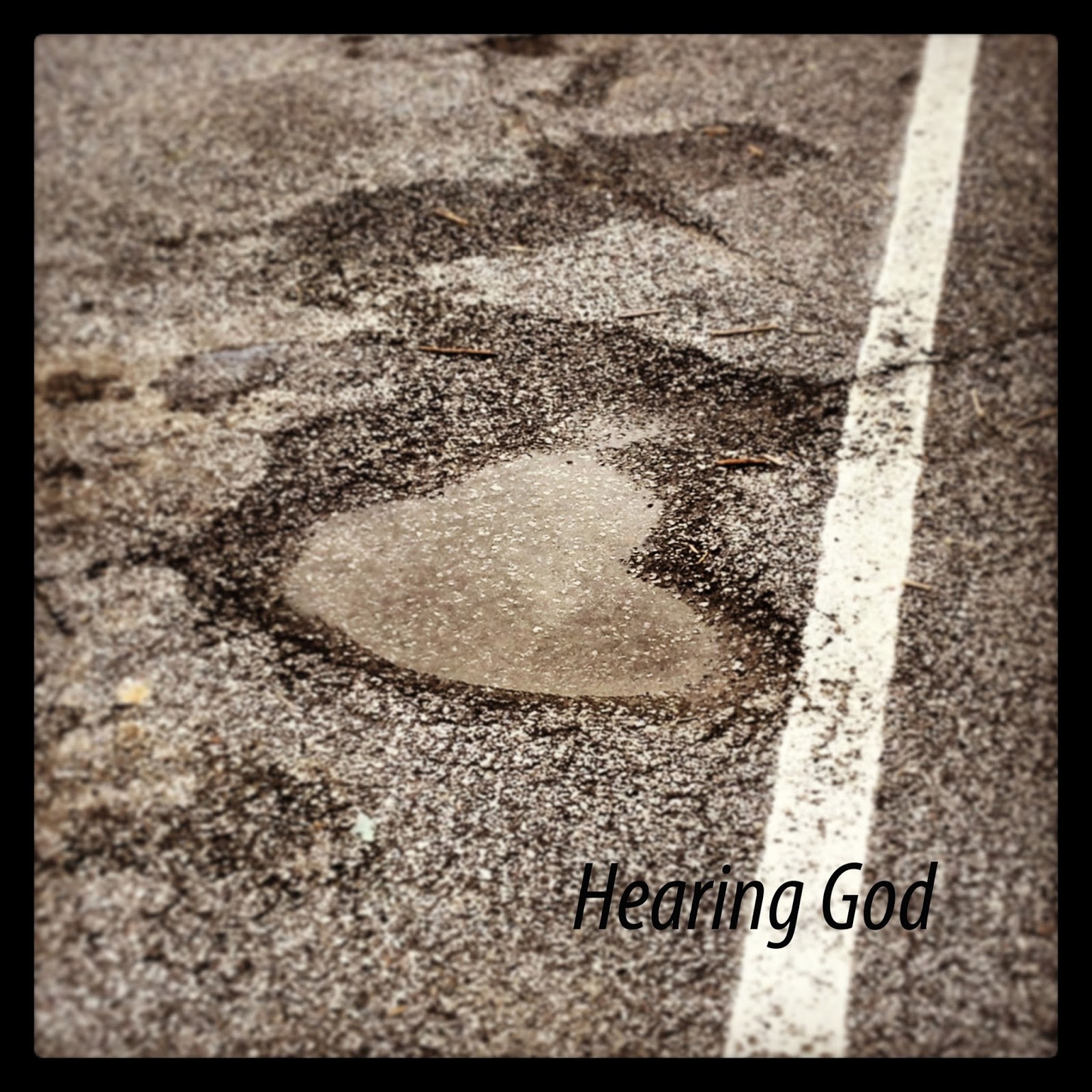 “The boy Samuel ministered before the Lord under Eli.
In those days the Word of the Lord was rare, there were not many visions.”
I Sam. 3:1
I can’t imagine living at a time in history when there was no Bible to turn to and yet God was silent.
I wonder if stories about God speaking to men and women like Abraham, Sarah, Moses, and Joshua, were passed along through families, and I wonder if people tried to find God in things as ordinary as heart-shaped mud puddles?
Or I wonder if they just moved along throughout their day not really thinking about whether or not God had anything new to say?
Whatever the case, things changed one night for Samuel.
As he lay down one early evening before the “lamp of God had not yet gone out,” he heard a voice say,
“Samuel.”
At first, he thought the voice was Eli the priest’s, who was now old and nearly blind; and so he ran to him to see what he needed.
This continued several more times and every time Eli told Samuel it was not his voice and to go back and lie down which Samuel did only to hear his name called again.
Finally, Eli realized it must be God speaking, so he told Samuel that if he heard the voice again he should reply,
“Speak, for your servant is listening.”
When Samuel did this, God shared a prophesy with him that would set in motion a major change in both Eli and Samuel’s life.
Reading this story this morning, I was reminded of a night over five years ago about two weeks after Nick died.
I was laying in bed so full of anger and grief that I felt I could explode.  My heart pounded and my head throbbed from so much crying.
I remember the intense feelings inside of me as I lay in the dark next to my snoring husband.
How could Tim sleep when my heart was so broken?
How would I ever survive life without Nick?
I tossed and turned; and the more I heard Tim snore,
the angrier I became.
I have never wanted to hit someone like I wanted to hit Tim that night.  I have never been quite beside myself like I was on that particular night.  It was as if the whole world had stopped spinning, and I was left lifeless in a dark room……………….
filled with the annoying sound of a snoring man.
My mind was incapable of sympathizing with the exhaustion Tim must have been experiencing as he also carried heavy grief.
Nick was his buddy, and Nick was gone from his life too.
No, on this night, it was all about me.
I was furious with the world, and on this particular night I felt as if God had abandoned me forever.
That’s when I heard one very clear word in the darkness,
“Tammy.”
I turned to Tim to see if he had realized I was so upset only to hear another very loud snore.  He was still sound asleep.  I thought I must be crazy, and I turned again on my pillow in anger.
Then I heard it again,
“Tammy,”
followed by Tim’s loud and persistent snoring.
Suddenly, I knew.
I was overcome with the awareness of God’s presence in my dark bedroom.
I still wish today that I had said,
“Speak, for your servant is listening.”
But I didn’t.
I just felt overwhelmed with peace as I realized God was gently saying,
“You have got to get a grip.
I am here.
In your darkest night, I am with you.
In your moment of greatest agony, you are not alone.
I know your heart is broken.  You will not walk this road alone.”
I fell to sleep not long after that; and I have carried that audible, clear, calm voice of God with me ever since.
I don’t speak of that moment often.
Some would think I had lost my mind if I did.
But this morning as I read about Samuel’s life-changing encounter with God, I felt like I was suppose to share with anyone who feels as if life is more than you can bear,
“God is with you.”
He wants to change your life with one small word,
“Your name.”
Speak your name today and imagine God gently saying it aloud to you.
In that moment, imagine God speaking all the words you need to hear.
Calm down.
Be strong.
Trust me.
Believe me.
Lean on me.
Take a deep breath.
Let me carry you.
I love you.
I am yours.
You are mine.
Then speak His Son’s name often as you cling to Him for strength in a tough, tough world.
We live in a time when hearing God’s voice is rare, but I still believe He speaks through nature, through His Word, and through prayer.
He is with us in the loudest part of our day if we will just tune into Him and listen.
He is with us in the quietness of the morning or night when no one else is near us.
God longs to be heard above the loud snoring of your world.
Listen for Him.
Look for Him.
He is speaking to you.
He longs for you to hear His voice and follow His lead.
Job 33:14
For God speaks in one way,
and in two, though man does
not perceive it.
John 10:27
My sheep hear my voice,
and I know them,
and they follow me.