Two weeks ago, I was in Washington, DC, with Olivia on her 8th grade field trip.

One of the stops on the last day of the trip was DC Cupcakes. 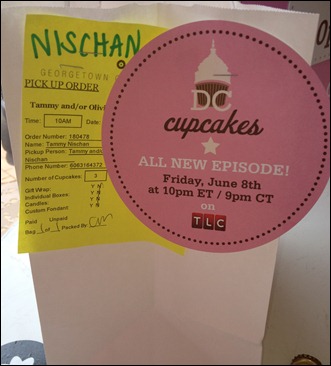 Olivia wanted to try the key lime cupcake, but I was drawn to the flavor “salted caramel.”

When I took a bite, OH MY! I had never had such a yummy combination!

The next week we were in Nashville helping Erich and Mallory pack for their big move; and on the last night there, we went out for ice cream at a place called Jeni’s. 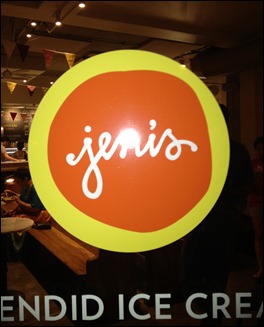 I couldn’t believe it when I saw “salty caramel” as one of the flavors! 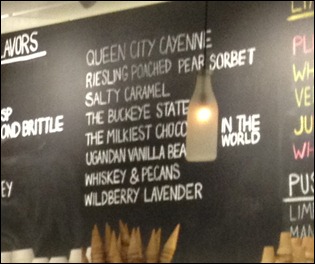 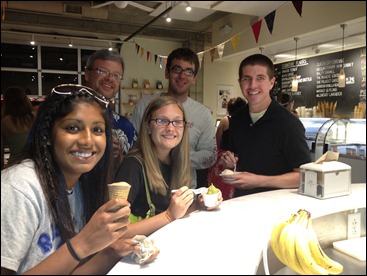 Where have I been while this combo has been becoming so popular?!?

Well, as fate would have it, two things happened over this past weekend.

First, we told the girls in jail that we would bring them cupcakes this Friday night if we could get permission.

Second, one of the men in our congregation came forward at the end of Sunday morning services and announced that next week there would be a cupcake fundraiser for Relay for Life.

When Vicki (my teacher friend from the homemade laundry detergent post below) and I heard about the fundraiser, we thought it was a perfect reason to practice making cupcakes by trying out a new recipe for the girls in jail.

So, this morning we got up early and gathered our supplies and dove in to a recipe we found for salted caramel cupcakes.

The recipe I loved best was located on a blog called www.werenotmartha.com.

So, I took their recipe and added my own photographs and comments.

I hope it is clear enough to follow successfully!

If not, remember “we are teachers,” we’re not even “werenotmartha!”

Here are the ingredients for the actual cupcakes: 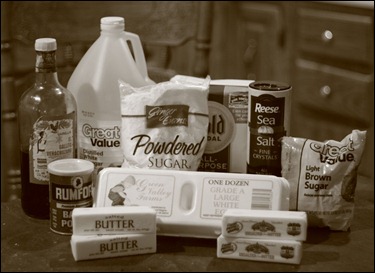 If you are overwhelmed by the number of ingredients it takes to make the actual cupcakes, you might not want to read on.

There is still a cupcake filling and frosting recipe to go!

I promise, this is worth your time, though.

At least one time for the memory!

I had to call my friend, Kim, who is the queen of cupcakes while lining the muffin tins.

I couldn’t get the papers to stay down in the pan…….she said they would go down when the batter was added and just hearing her say that made me feel better.

Here’s what you do next:

Combine the flour, baking powder, and sea salt in a medium-sized bowl and set aside.

I just learned a few years ago that it is super important to mix the dry ingredients very well before combining them with your liquids.

If the baking powder is all in one spot, for example, it won’t spread through the batter unless you mixed it well while it’s dry! 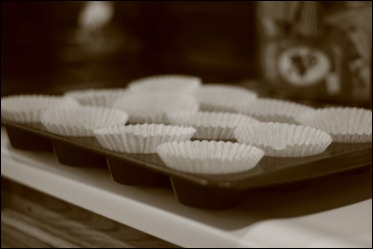 Using an electric mixer, cream the butter and brown sugar on medium-high until the batter begins to look fluffy.

We never really felt like we achieved a “fluffy” mixture, so we went ahead and moved on………..

sometimes you’ve just got to make executive decisions, so we made one. 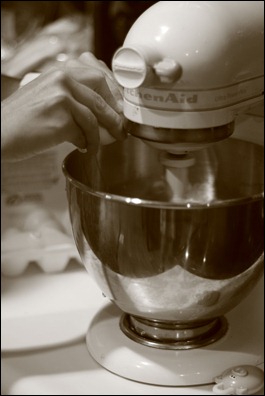 Add eggs, one at a time, until each is mixed well into the mixture. Then add the vanilla.

Alternate pouring a little flour then a little buttermilk into the mixing bowl and mixing well until you have emptied both measuring cups completely into the butter/egg mixture. 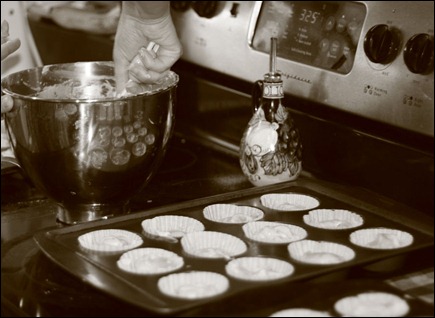 Fill each muffin tin about half way with batter and bake for 23-25 minutes.

This was a perfect chance to sit outside and have a cup of coffee. 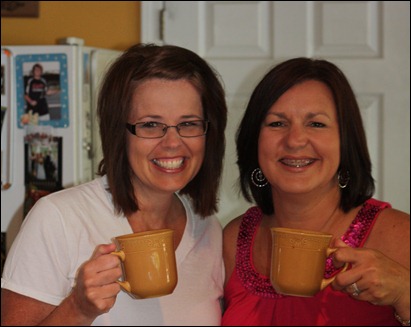 After removing cupcakes from the oven, they have to cool on a wire rack before the next step.

I’m going to be honest.  I didn’t bother to get out my wire racks…….just admitting this makes me want to Google the importance of wire racks in the cooling process, so I’m probably going to take a break from this blog post long enough to do this!

Well, I’m going to add this info from www.ehow.com so, unlike me, you will hopefully take time to dig out your wire baking racks.

As Vicki and I read on in the recipe, we realized things were going to get a bit more complicated, and we decided to take a lunch break.  I had a lunch meeting scheduled, and Vicki had some work to do for school.  So we said “goodbye,” left the cupcakes to cool, and decided to get back together in the afternoon.

The next step in the cupcake recipe was making the caramel filling. 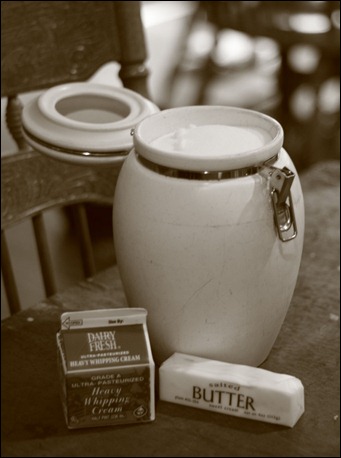 Here are the ingredients for the filling: 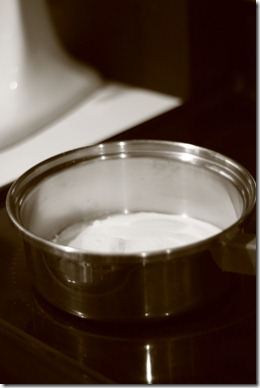 In a large pot, melt sugar over medium/high heat. I am embarrassed to say that I did not know you could place sugar in a pan with NO OTHER ingredients and actually watch it melt!

You have to gently whisk the sugar along the way, but I promise that eventually it is bubbling like a liquid!

After the sugar melts, add the butter and mix again until it begins to melt. 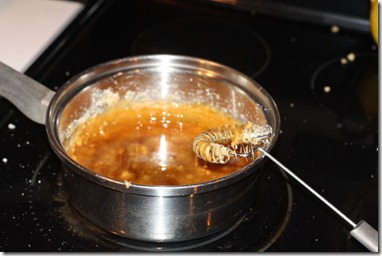 Fold in the heavy cream. The recipe says that the mixture will immediately begin to foam, so I had my camera ready to photograph this exciting moment because Vicki was not back at the house yet.  I didn’t want her to miss this monumental part of the cupcake cooking process! 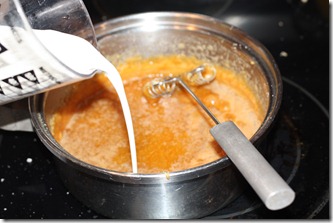 You can sort-of see the bubbles in the pan.  I was holding the camera while pouring the heavy cream, so I may have missed just how thrilling this moment was.  If you try the recipe, let me know how much yours foams up.

Keep whisking until the sauce is smooth. At this point in the cooking process, I was getting a little nervous because the three ingredients seemed to be forming into a rock-like surface on my whisk.  I was sure I had overcooked the caramel filling.  In the end it all worked out, though!

Remove from heat and allow the sauce to cool down a bit. 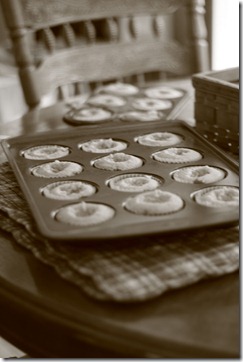 Cut a small circle out of the top of each cooled cupcake. Fill with a teaspoon of the delicious caramel sauce. 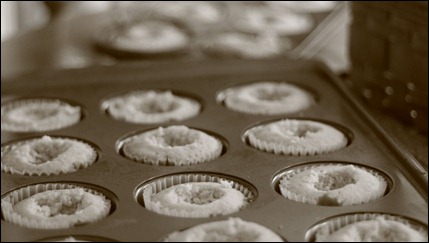 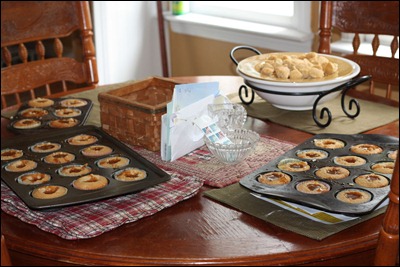 I was extra happy to see that one of my scoops ended up looking like a little heart by accident!

I could feel the love immediately, and it made me smile and grab my camera (imagine that!) 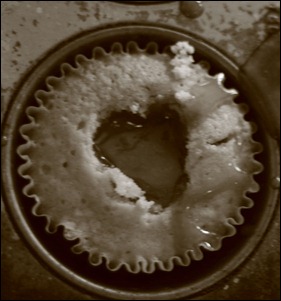 After all the cupcakes have been filled with caramel filling, place the cupcake “lids” back on top of each cupcake.

I guess I should have told you that sooner, so you wouldn’t sneak a little snack! 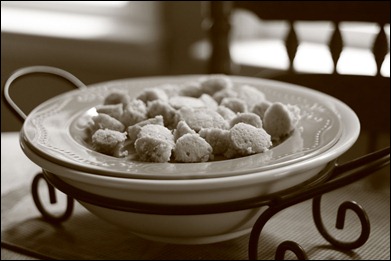 By now, you may be thinking, “How badly did I really want to try a salted caramel cupcake?” 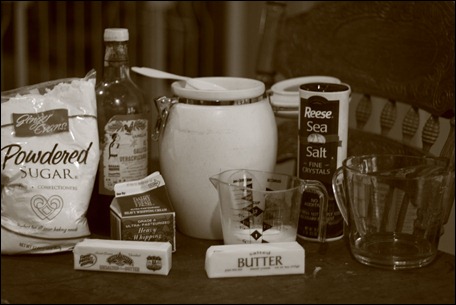 First, combine sugar and water in a saucepan and bring to a boil. The recipe said, to “Cook, without stirring at all, until it starts turning a deep brown/amber.”

This may have been the most difficult part of the day……..

waiting and waiting for water and sugar to boil and turn brown and not stirring the entire time we waited , but I promise it finally began to boil and change color!

Actually, once it started boiling, I think we waited a little too long to remove it from the heat and part of our “deep brown/amber” became almost black.  We ended up removing one clumpy piece of burned caramel…..but even it was yummy to eat (we both had a little bite).

After you remove the amber mixture from the heat, very slowly add the cream and vanilla.  I think this is because the mixture is very hot; and if it splatters on you, it burns.

Lightly mix all of this until it is smooth in texture.

I’m going to quote ‘werenotmartha” on this next part, because they said it beautifully,

“Allow the caramel to cool, for about 20-25 minutes, but make sure while it’s cooling you keep an eye on it to make sure you’re still able to pour it.

If it gets too thick, you can add a touch of water, reheat on the stovetop, and continue whisking until the caramel is pourable again.” 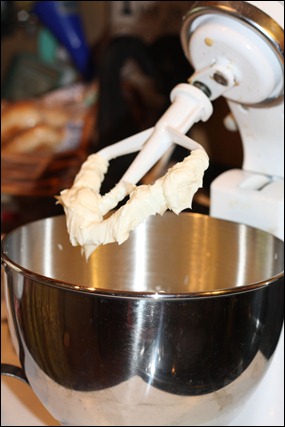 While the caramel was cooling, we went ahead and began mixing the butters and salt until fluffy.   We then added the powdered sugar slowly. 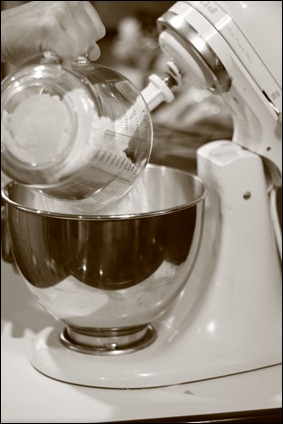 By this time, the caramel was cool enough to add so we mixed it in and the frosting was ready to spread on our waiting cupcakes. 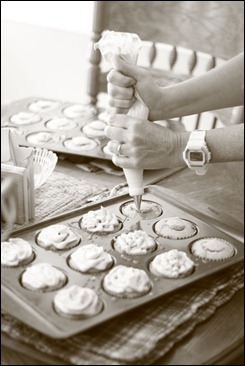 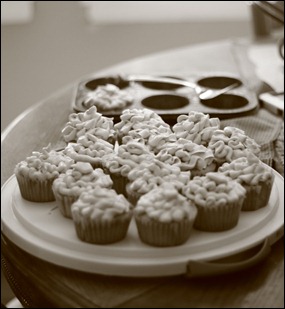 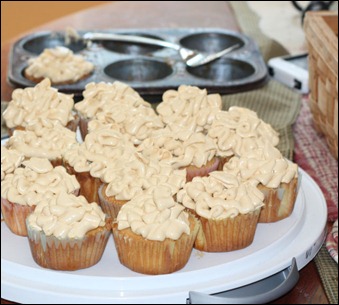 I wish I could hand you a cupcake through the computer screen!

They really are yummy even if I had a part in their making!

It’s amazing how wonderful things can turn out when you follow a recipe!  I need to do that more often!

I can’t believe we’re going to attempt these again next week for Relay for Life!

That’s about the only time teachers like me and Vicki have to try out new recipes!