When Your Hands Are Just Too Full

I knew I had overestimated what I could carry in one trip.

A tub of colored pencils

until I closed the car door (with my foot) and turned to walk inside.

I could feel the wobbly stack beginning to slip

and before I could see what was happening,

I heard the unmistakable sound of something breaking.

Colored pencils bounced randomly across our weathered pavement and the tub that had once locked securely now lay shattered,

exposing its contents in a way that said, 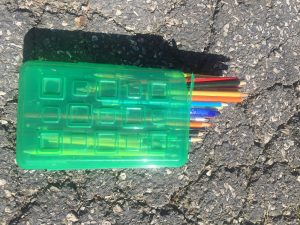 Something about this broken tub reminded me of the woman that had just held these pencils.

so done with the time she’s now serving,

an inmate I saw today had drawn a picture of herself crying.

she penned above her tear-stained drawing.

As we sat and looked at what she was feeling,

I found myself wordless.

We don’t get to choose our beginning in this world.

And hers had been anything but easy.

Layers of a hard life,

now covered by the shadow of her looming court date,

were more than she could bear.

And like me trying to make it to my door,

her hands were just too full.

What do you do when you realize you just can’t carry it all anymore?

Jesus realized His own hands were too full

and took the heavy cup He was holding to His Father,

“Father, if you are willing,

take this cup from me;

yet not my will,

but yours be done.”

When the Son of God realized He needed help with His heavy load,

He wasn’t afraid to ask.

Cast your burden on the Lord, and he will sustain you;

he will never permit the righteous to be moved.

Even the Psalmist knew where to go with hands that were overflowing.

Peter, writing to Christian exiles spread across the Roman empire who surely felt their grasp on life was slipping,

Cast all your anxieties on him,

because he cares for you.

He knew what we all eventually learn……

We just can’t do this thing called life all by ourselves.

Stop trying to figure things out.

Stop trying to make sense of this or that.

The past can’t be changed

And today is often too much to hold on our own.

The best thing to do when the load we’re carrying is too heavy is simply lay it down.

Lay it all down.

the tub of colored pencils,

whatever it is that’s about to slip from our hands and shatter anyway…………….

lay it all down.

Leave it at the foot of the cross, because He’s there.

And He’s got this.

He was (and still is) with us in the joy and pain we feel when we look back,

and He’s ahead of us in the good and bad that awaits.

So today, I’m laying it all down,

and reaching out for His.

If your hands are too full,

I hope you’ll try it too.

For I am the LORD your God who takes hold of your right hand and says to you,

Do not fear; I will help you.