Where Wisdom Can’t Be Found

“What do you want to be when you grow up?”

We ask children this question from the time they’re very young.

But more often than not, the answer is,

I read recently that the question we should be asking kids today is,

“What problem do you want to solve when you grow up?

Change their way of looking at the future.

Help them find their purpose on the planet.

Because the truth is,

“Don’t we all want to know what problem we can solve?”

The world has changed a lot since Job walked on the earth,

but some things are very much the same.

We still ask questions we haven’t even answered ourselves.

“Where can wisdom be found,

and where is understanding located?”

but came up empty.

He watched miners dig for iron,

but wisdom could not be found…

in the depths of the earth.

The ocean had no answer.

The sea had no reply.

even they didn’t know.

Wisdom could be found nowhere in the land of the living.

Yet its value couldn’t even be measured with gold.

So where was this treasure of great price hiding?

Why was it so difficult to find?

The angel of death had even heard of it –

but had no answer.

and yet so very far away.

Thankfully, Job saw something others seemed to miss.

He saw God’s presence in his life….

even in the midst of his great suffering.

And he realized the search for wisdom would never be the way to find it.

The real search had to be for the One who established it in the first place.

God knew where wisdom was hiding –

and it wasn’t in a place.

It was in a state of mind.

“The fear of the Lord – that is wisdom.”

Maybe that’s the problem we’re facing in our society.

So many people are struggling with anxiety.

A sense of fear about today….

They can’t really put their finger on what they’re afraid of though.

And any unnamed fear has power.

So what if we named it.

Said it out loud.

Announced to the world even as Christians,

How freeing would it be to admit that the One who spoke the world into existence has more power than we ever will?

And His ways truly aren’t are our ways –

Maybe the song, “Let It Go,” became so famous because that’s what we all want to do.

You don’t have to watch the news for long to feel frightened about the future.

So what if we traded this unsettling anxiety for a fear that brought us knowledge?

Gave our white-knuckled hands a break.

Turned our sleepless nights over to someone else.

Yes, the thought of handing everything over to Someone

who doesn’t always work in the same way we might choose feels scary.

But Job was getting there.

He was slowly realizing just how weak he was.

And in that weakness,

he was finding a strength he never knew he had.

But not from the depths of the earth.

Or in the waves of the sea.

Job was slowly beginning to see that the very thing he needed couldn’t be found by looking.

He loves to work in mysterious ways.

things that makes sense to us are generally opposite with Him.

Wisdom could only be found by surrendering to the One who created it.

My word for this year is “surrender,”

and its’ suddenly making sense.

and you’re looking for answers today,

think about changing your questions.

And be okay with feeling a little frightened as you do.

But having nowhere to place your trust is even scarier.

This is the way to wisdom.

And there’s no other way than this.

The fear of the Lord is the beginning of wisdom

and the knowledge of the Holy One is understanding. 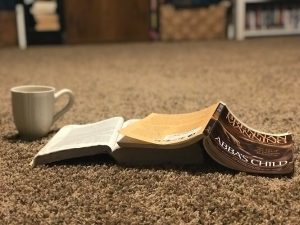