Genealogies are tedious to read.

I stumble over the letters of each name,

trying to get them right phonetically,

but eventually find myself moving more and more quickly through each new verse.

Am I really taking time to read these lists,

or am I merely skimming through them so I can make it to the next chapter?

I know the truth.

Skimming has become my practice when a long list of strange names is before me.

Every once in a while, though,

one of the names catches my eye –

They’re worth reading just to hear the sound their letters make as they roll across my tongue.

But skimming a name or even sounding it out

gives no credit to the person who walked the earth being called by it.

I ask myself a few questions…..

not so much for answers but to give these men (or women) the chance to become a little more real to me.

Don’t we all want to be remembered by more than our name?

What did he think about as he strolled through his village?

Did he ever have to line up alphabetically and internally resent his mom?

Did Bukki have a favorite color or favorite place to eat?

Were there even restaurants back then –

places you could gather and pay someone else to cook your food?

Was Jehozadak allergic to anything?

Did he have any hobbies?

Did he ever lie awake at night worrying about what the next day might hold?

unless Heaven has workshops and they end the sessions with time for questions.

(I’ve always thought this would be fun.)

One thing I do know, though,

with no need for a class,

is every single man and woman listed in a genealogy mattered.

They mattered not only because of who they were

but also because of what they did…….

They moved the story of humanity along

from one generation to next.

with them on their journey,

these names represent generations of people who carried God to those who came after them.

That’s a lot of responsibility –

carrying God to the next generation.

I think about my granddaughter singing “The B-I-B-L-E,”

and I hear her little voice in my head,

“I stand alone on the Word of God,”

Will she ever have to do just that?

Will there come a day when the world around her completely turns on Him,

and she finds herself having to make a decision.

Turn with the crowd.

Will she know enough about His love to keep standing?

The responsibility is in her parents’ hands…..

She deserves to know the truth.

Her whole generation does too.

He knew them before they were even born,

and His plans for them are good.

The next generation also needs to know –

Jesus is the Son of God.

He walked the earth as a man,

experiencing life with all its aches and pains,

He was murdered on a cross for our sins,

even though He had the chance to walk the other way.

Jesus chose death so you and I,

and the next generation,

They deserve to know all of this and so much more.

It’s their story too.

This life is filled with so much brokenness and pain.

It’s easy to get caught up in the agony of it all,

watching the news or scrolling through Facebook or reflecting on our own life stories,

but this world is filled with so much Hope at the very same time.

And the next generation needs to know about this Hope.

Rain is pouring down outside my window this morning.

If I opened my back door and stepped outside,

I would be soaked in seconds.

I’ve been blessed with a roof over my head.

Protection from the storm.

And I believe that’s what God is for me too.

A wing under which to hide.

by taking me to church

and sending me to church camp

and praying for me

and so much more.

Don’t our children and grandchildren deserve this same gift?

I love that my morning reading included a long, long list of difficult names to pronounce,

but was then followed by a Psalm that reminded me of why each of these people mattered.

I may choose to skim through a list of genealogies,

but I’m so thankful God never skims over me or you.

He knows every detail of our lives,

and He cares deeply about each one of them.

I want the next generation to know this too.

My people, hear my teaching;
listen to the words of my mouth.
I will open my mouth with a parable;
I will utter hidden things, things from of old—
things we have heard and known,
things our ancestors have told us.

We will not hide them from their descendants;
we will tell the next generation
the praiseworthy deeds of the Lord,
his power, and the wonders he has done.

He decreed statutes for Jacob
and established the law in Israel,
which he commanded our ancestors
to teach their children,
so the next generation would know them,
even the children yet to be born,
and they in turn would tell their children.

Then they would put their trust in God
and would not forget his deeds
but would keep his commands.

They would not be like their ancestors—
a stubborn and rebellious generation,
whose hearts were not loyal to God,
whose spirits were not faithful to him.

I have a windmill in my backyard in Kentucky.

It is rusty and the blades no longer turn with the breeze.

a tiny town in Oklahoma –

the first place I ever sat through a church service

If my family were listed in a genealogy today,

each generation would be represented by only one name,

but that name would matter.

Because the story of God’s love was carried from their generation to mine.

I’m so thankful this morning that the generation before me took time to teach me what I want every child to know.

and life makes sense only because there’s more to this world than what they will ever be able to humanly see or hear. 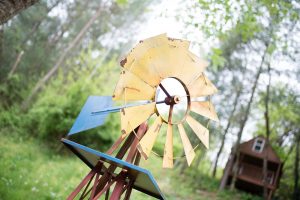