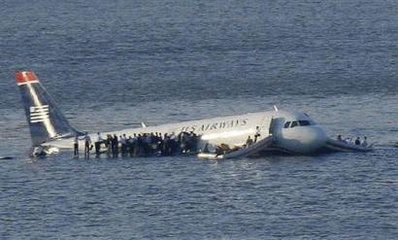 Psalm 81:7
In your distress you called and I rescued you, I answered you out of a thundercloud; I tested you at the waters of Meribah.

I was on my way to Ashland this afternoon to watch a couple of Nick’s closest friends play basketball (Nick was on their team in elementary school). My husband called and asked if I had heard about the plane crash today in New York and how every single passenger was rescued from the Hudson River! Tonight as I looked at the photographs and saw the people lining the wing waiting to be rescued, I couldn’t help but wonder where they “stood” with the Lord at that moment in time.

As I read the interviews, there was an overriding theme of “God’s presence, God’s decision to save, God’s control.” I never read of anyone who said, “Fate was on my side,” or “It was my lucky day.” No. At a time like this, when all seems lost and then salvation comes, people-no matter how unreligious before-seem to suddenly have a very deep faith.

I sat and clicked through the pictures. Some faces were filled with panic. Some with serious determination. Yet others seemed calm in spite of the trauma.

And then my mind went back to the wings of this plane, slowly slipping into the waves of the river yet providing the only safety for the nearly 200 hundred men, women, and children waiting for a boat to arrive. What were the people saying as they waited? Were they complaining? Were they praying? Were they in shock? Were they filled with terror?

And I wonder if the pilot who definitely is a hero will take all of the credit for a successful landing or if he will give some glory to the Creator of aviation?

I guess I”ll never know the answers to many of my questions, but I do know this.

The lives of the people who were on that plane will never EVER be the same. They had their moment of testing while standing on an airplane wing in the middle of an ice-cold, rapidly flowing river.

Wouldn’t it be great if every passenger on that plane walked away sold out on a God who has the power to do the unimaginable?

For some reason, God made a statement today.

We may not know exactly what that statement is until our faith is made sight, but for tonight it is enough to simply know that the same God who brought the Israelites to Meribah also brought this airplane loaded with passengers to the Hudson River and that His ways are higher than our ways.

Standing in the shelter of God’s wing and longing for the day when I fully understand His plan,