Are You Hiding Among Your Baggage?

While we were in India we had to take two very long train rides (one for 11 hours…one for 13!!) 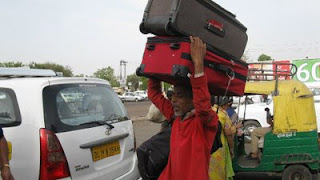 To get from the taxi to the train and from the train to another taxi, men called “kulis” (I think that’s how you spell it) would help us get our baggage to each location. 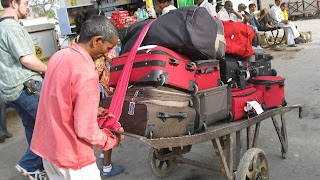 This morning as I was reading in I Samuel, I just froze on the story of God selecting Saul as the much-desired king of the Israelites.
God had told Samuel that the people were not rejecting Samuel himself by asking for a king, they were rejecting God as their one and only king.
So……God does what He does best! He answers they plea by choosing an ordinary donkey herder for an extraordinary job!!
But when the lots are cast and the selection is narrowed from all tribes to the tiny tribe of Benjamin……..
And then to the family of Saul………
And then to Saul………..guess what? Saul is hiding in the baggage!!
One concordance suggests that maybe Saul was more comfortable with the baggage carriers of the day (donkeys!) then he was with the thought of being king of Israel.
Whatever the case, someone spotted him and he was given a role in history that carried many responsibilities and many choices.
Unfortunately, Saul was like many of the Israelites of that time……….not the most God-centered decision maker…..
Which ultimately led to his destruction….
I guess for today, Saturday, April 25th, I am asking myself this question:
What is my baggage? What is my safety zone and does it limit my service to the Kingdom? Is God calling me to step out of it today in some way? If I do, will I be humble enough to constantly turn to Him for guidance?
Wow! I was getting ready to mow the lawn………………..I sure have a lot to think about now while I’m mowing!!!!
Looking forward to some baggage soul-searching,