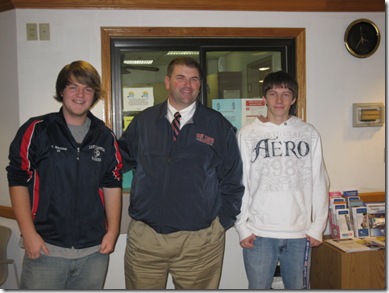 My 16-year old son Todd (in blue jacket with red stripes on sleeves) has been sick for about a week.

I took him to the doctor yesterday and then back again today to find out the results of his x-rays. He’s doing breathing treatments at home and taking a couple of medicines until he goes back to the doctor AGAIN on Friday. Shew! His Christmas break started a little early. 🙁

As we sat in the waiting room today, his friend Nolan walked in (on far right) for an appointment. Just a few minutes later, in walked the principal (in center) from their high school. He was bringing his son for an appointment as well!!!

Nolan’s mom and I both had our cameras, so we had to take a picture! It was so funny to have that many people from Grayson in an Ashland doctor’s office at the same time!

Moral of this story: If you miss school, be careful where you go…….you never know when you might run into your principal! And if you’re going to run into him, it’s always great to be sitting in a doctor’s office!

Makes me think about all of the places we go and all the things we do in a normal day and how we’d feel if Jesus walked in.

If we could simply remember, He’s already wherever we are. He already knows what we’re saying, where we’re going, how we’re acting, and what we’re doing…………..

…..And surely I am with you always, to the very end of the age.”