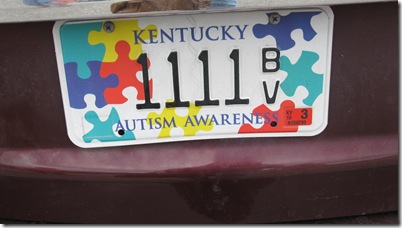 For those of you who don’t know, Nick gave himself the nickname “7-11” when he found out that he had a second brain tumor at the age of 11.  He had his first one at the age of 7.  We thought this was such a cute response to the news, and the number has been special to us ever since!

Well, not long after Nick died I learned from Lynn, a dear friend of mine here in Grayson, that she too had a very special number with her son Jerry who was killed in a car wreck about 10 years ago.  It is 11 11.

So now we have this special little bond.  If either of us sees the time and it is one of those two numbers, we text or call each other and we say a pray for each other.

The other day I was so excited to see this license plate!

My heart immediately thought of Jerry and of Nick and then I whispered a prayer for Lynn and her husband Bob.

Thank you, Lord, for simple reminders of your faithfulness and to pray for those we love.