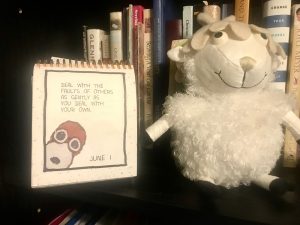 I have to confess.

There was a small chapter of my life

when I watched “Days of Our Lives.”

I knew the plot line was shallow.

And I knew that in real life

dramatic conversations rarely end with someone sipping coffee while music plays them out of the scene.

and isn’t is sad that nearly 30 years later I can still remember a few of the character’s names?

Today’s Bible reading felt a lot like one of the episodes of this show I watched so many years ago.

Wives battling for their husbands attention by trying to have the most sons.

A father refusing to let his daughters move away.

A son-in-law planning their escape and then having his favorite wife steal one of her father’s false gods…..

and then sit on it and lie in order to save her life.

This was enough to fill a week of prime time,

but it wasn’t the end.

Laban and Jacob decide to build a memorial.

A mound of rocks as a testimony that God would watch over all of them as they went separate ways.

A calm filled the air.

Jacob was finally free from 20 years of working for his father-in-law who changed his wages ten different times,

But not long into Jacob’s journey back to Canaan,

he must have remembered the reason he had fled years before.

Jacob was a thief on the run,

and for 20 years he had been spared the anger of the one he had deceived.

In the same way I would probably act today,

Jacob sends messengers ahead of him with gifts.

Softening the blow of their reunion.

Hoping to make peace with his sibling long before their eyes meet.

The night before they meet,

Jacob sends his family ahead of him and spends the night alone.

I’m not sure why.

Jacob stays on the other side of the stream.

And God meets him there.

Not to comfort him,

but to wrestle with him.

All through the night,

Jacob struggles with this man to the point of being injured yet refuses to let go.

In severe pain from a dislocated hip,

refusing to release his grip on this heavenly visitor until he gets one thing…….

In that moment, the mystery man says,

“Your name will no longer be Jacob.  It will be Israel because you have struggled with God and with men and have prevailed.”

Jacob stands up and begins to walk toward Esau,

limping with every step.

The music swells as these two brothers finally see each other face to face,

and I have to believe Esau felt some pity for his younger brother as he saw him struggling to walk,

Esau runs to him.

Throws his arms around him.

And then they both begin to weep.

There’s no soap opera that could top this morning’s reading.

No movie that could hold my attention the way these chapters did.

But when I try to pull out a lesson,

There are so many big moments on these pages.

So many characters facing personal drama.

Leah, the second-favorite wife, who finds her only significance in the sons she bears.

Rachel, a thief and liar, who has just what it takes to keep Jacob’s heart captivated.

Laban, a controlling father who finds it difficult to let his girls go.

Jacob, the son of Isaac who knows he tricked his way into his inheritance…..and his blessing.

No wonder he wrestles for a new one.

The first one came way too easy.

And his limp will forever remind him.

Esau, the brother who didn’t seem to appreciate his birth order…

and was eventually cheated out of it.

after her favorite son went into hiding to save his life.

Surely Esau’s life was filled with tension just as Jacob’s was.

No one got out of this story easy.

And honestly, none of us do either.

We all have moments when we fill second place in the eyes of someone we love.

We all have moments when we make hasty decisions

and then have the choice of fessing up to our mistakes or sitting on them in hopes of keeping them out of sight.

We all have people or things we hold on too tightly.

Only letting go when we have no other option.

We’ve all had nights where we wrestle with life.

we all have something that has forever caused us to limp.

And I’m sure we all have someone we need to forgive.

This morning I saw myself in every character……

And maybe that’s what it’s all about as I read the Bible from beginning to end.

Seeing my life played out through the lives of others

and realizing God was right there.

In the midst of it all.

“Have I not commanded you?

Do not be frightened,

and do not be dismayed,

for the Lord your God is with you wherever you go.”