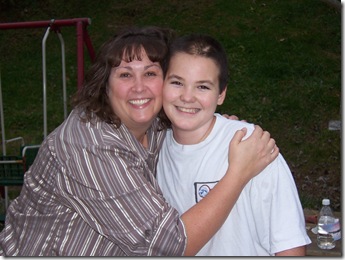 The Titans are playing tonight.  Nick’s favorite team!!!  Our son Evan called today from college and asked if anyone was coming to watch it.  He wanted to drive home and watch it with Tim.  I was thrilled!! And two of Nick’s buddies are here too..helping Tim feel so loved.

But I was extra-happy when I got a text tonight from Carla saying she was watching the game and had whispered a prayer for us.

Carla is my friend and she was also Nick’s homebound teacher!  She pulled Nick through his portfolio writings and because of her we have a beautiful memoir about “Mamaw” that Nick wrote.  A treasure I haven’t even been able to give my mom yet.

Carla mentioned that she thought it was so perfect that the Titans were playing in the opening game.  Sort-of like Nick was saying that he is here and it is ok…..

RIGHT FROM THE START.

I’ve been dreading football season.  It was always Nick’s favorite time of year.

But honestly, the sounds of the football game coming from the living room and the frequent hoots and hollers from the guys are both making me smile tonight.

Tim is wearing one of Nick’s jerseys.  He has three of Nick’s Titans’ ball caps lining the top of the TV.  And I know deep inside that…

Nick has the best seat in the house!

Thank you, Evan, CJ, and Derek for being here with Tim!

Thank you, Carla, for letting me know you were praying for us!

Thank you, Lord, for carrying us through another first…. 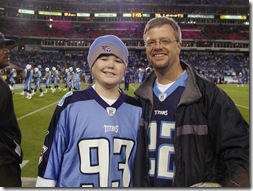 Nick and Tim at the Titans game last October.

Thank you, Mike and Carol, for this precious memory.