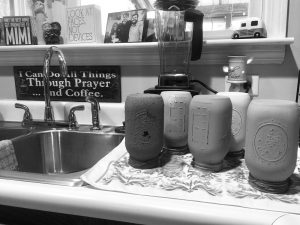 It’s funny how a sermon can hit you in an unexpected way………..

cause your mind to wander…………

and the next thing you know you’re thinking about what’s sitting on your kitchen counter that very second and how maybe just maybe you washed out empty jars the night before not so much to clean them but to somehow prepare your heart for the message the next day.

The widow, at the end of all her earthly hope, came to Elisha and he asked her two questions,

“How can I help you? Tell me, what do you have in your house?”

“What do you already have?”

She skipped the first question.

Maybe she didn’t have a clue how to answer or maybe the answer seemed too obvious.

Her husband had recently passed away and now her sons were going to be taken from her because she had no other way to pay her debt.

At the end of everything,

“Your servant has nothing there at all except a small jar of olive oil.”

And that’s where Elisha stepped in.

“Go around and ask all your neighbors for empty jars. Don’t ask for just a few. Then go inside and shut the door behind you and your sons. Pour oil into all the jars, and as each is filled, put it to one side.”

I wish I could have seen her face as she heard Elisha’s instructions.

I would have loved to have heard the thoughts that surely raced through her mind as she pictured her almost-empty jar of oil at home and wondered if Elisha had truly heard her when this was his reply,

“Go get as many empty jars as you can and fill them up.”

I don’t know if she hesitated.

I don’t know if she went back home and looked at her own jar and thought,

“This is going to be impossible.”

All I know is what the Bible said she did,

“She left him and shut the door behind her and her sons.

They brought the jars to her and she kept pouring.”

The story goes on to say that the oil didn’t stop flowing until all the jars were filled and there were no more empty jars.

The oil stopped flowing when there were no more empty jars.

God’s miracles needed something I had on my own kitchen counter.

A lacking of completeness.

Grief has so many sneaky ways of reminding me I’m not whole.

I try to rise above this feeling.

I try to fill my life to the top with all things good.

But on this particular Sunday, God whispered something I know I needed to hear,

My miracles can’t happen if your jar is already overflowing.

wondering if anyone else felt as empty as I sometimes do

or if any other minds had wandered to the neighbor’s completely empty jars.

Was anyone else stepping outside the story of the widow’s faith to the faith of the other characters in this chapter of II Kings??

Was anyone else’s mind drifting to the house next door?

I couldn’t let the thought of these people go.

The image of two boys walking through their village asking not for oil but for empty jars………….

and how the neighbors must have felt so inadequate handing what they viewed as “nothing” to children who so desperately needed filled.

Haven’t we all been asked to give when we feel we have nothing left to offer?

to the shepherds on the night Jesus was born.

Showing up with nothing more than “empty jars,” they bowed down to worship the King of Kings………….

Is there significance in the fact that these simple staff-holding sheepherders were the only ones personally invited by the angels to the birth of the King of Kings? 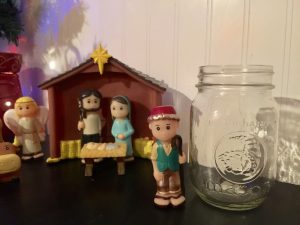 They had nothing to offer but themselves…………….

and they were enough.

He only needs willing, worship-filled people.

but they were sent by someone with an ulterior motive.

Bowing down, they offered treasures……………….and

God definitely used their gifts in spite of the reason they were sent.

But what if the biggest gift given on that particular day was the one the wise men received as they were transformed in the presence of Jesus?

The Bible says they left and went home a different way.

Doesn’t my direction change when my heart is changed? 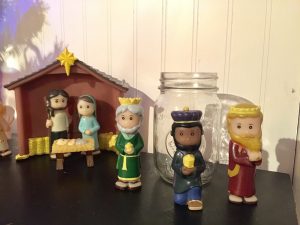 Giving what we have changes us.

Giving what we do not have changes the world. 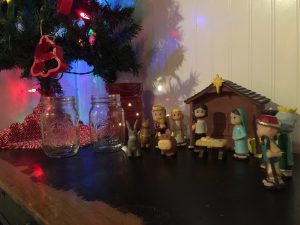 I never want to forget the sermon my heart heard when my mind wandered.

Maybe it really is as simple as giving empty jars.

Though the fig tree does not bud
and there are no grapes on the vines,
though the olive crop fails
and the fields produce no food,
though there are no sheep in the pen
and no cattle in the stalls,
yet I will rejoice in the Lord,
I will be joyful in God my Savior.

Those who sow with tears will reap with songs of joy.