My Angel Had Wings…………….and Antlers

I’m not a big fan of flying.

Actually, it terrifies me every single time I feel the acceleration of the plane and realize I’m quickly leaving the earth’s surface and heading into the clouds.

As a matter of fact, it wasn’t until Nick’s Make-A-Wish trip to the Bahamas that I finally agreed to step into a winged form of transportation for the very first time in my life…………..at the age of 42.

Until then, I used every possible excuse to avoid getting from one place to another in any other way than a car.

After Nick passed away, I threw caution to the wind and agreed to fly to India to visit an orphanage his foundation helps support, but I had no idea God was preparing me for a life that would require air flight on a much more regular basis.

This past year I experienced several flights that felt much more like an off-road adventure than a smooth journey through the air.  Holding tightly to the arm of my seat with hand and Tim’s arm with the other, I always close my eyes and literally whisper prayers the entire trip, never once caring if anyone was watching me……………I just want the trip to end and the plane to safely land on the ground.

A couple of weeks ago, thanks to frequent flyer miles, Tim and I were able to make a quick trip to Dallas to see our oldest son and his wife for a few days.  On our way home we had a layover in Chicago, and I was feeling incredibly anxious about yet another take-off after a very bumpy flight………………in the dark…………….into a sky that showed signs of storms.

Once again the announcement was made that our flight would have no empty seats.

Why does a full plane seem even more frightening to me, as if a few more pounds will affect its ability to stay in the air?

As Tim and I walked down the long aisle to find seats,  I tried (as I always do) to make eye contact with other passengers as we moved through the plane, smiling and hoping to confirm in my soul that we were on a safe journey by the looks I received in return.

As we reached our first option for sitting together, an extremely happy-faced lady looked up at me and jokingly said, “Are you brave enough to sit by me?”

Her antler headband and gigantic grin must have caused several people ahead of us to keep on moving, but I found her smile inviting and said, “Absolutely!”

Looking back on this moment and her specific question, I can already see how God was working.  I had been talking with my daughter-in-law about what word I wanted to claim as my focus word for 2016 and eventually, with the help of a friend and Mallory, decided on the word “fearless.”

Maybe God was wanting me to realize that I already have a little courage…………at least enough to sit by a woman with antlers!

As I sat down, though, I realized she was also wearing a flight attendant’s uniform.

The Southwest Airlines’ wings pinned to her blue top weren’t the only wings she was wearing, though, because I truly believe she was an angel sent straight to me on this particular night.

Why am I always surprised when events unfold like this one did?

As the plane took off, I told her I’m not a big fan of flying but had never had the privilege of flying next to a stewardess, and she laughed and asked if I wanted her autograph.  I said, “I think I just might!”

She then told me that if I had been on the flight a month earlier I would have been able to read a story about her in the airplane’s magazine.

Of course I wanted to know more, so I listened as she told the most beautiful story about an eight year old boy who was flying alone after visiting his little friend who had brain cancer.  She had been put in charge of this little boy as he flew and when she heard about the illness of his friend he had just hugged goodbye, she asked his mom if he could get on the plane for a few minutes with his friend.  While on the plane, she allowed the two boys to go into the cockpit and put on the pilot’s and co-pilot’s headsets.

She took pictures of the boys having fun and then returned the sick boy to his mother.

When their plane arrived at the next airport, the other mom who was waiting for her son who had been on the visit had already received the photographs on her phone was crying.

These two moms then a letter to Southwest Airlines, resulting in a special dinner in which my antler-wearing friend received an award for her act of kindness.  She was so humble as she told the story, and I could tell this was something she had done not for recognition but as a way of showing love.

You can only imagine how my heart was feeling, though, as she was telling me her story totally unaware that I had lost a son to brain cancer.

I kept seeing Nick’s face, imagining him and a buddy having this kind of memory together!  He would have been grinning ear to ear!

When she finished the story, I felt compelled to tell her mine.

And before we knew it, we were sharing Scripture and even clasping hands from time to time…………..

both certain that our meeting was no accident.

In what seemed like just a couple minutes, the pilot announced our nearing arrival in Columbus and I remembered, for the first time, that I had been high in the sky in turbulent weather yet had talked and talked with this lady as if I were sitting in the backseat of a car.

A jolt of the plane pulled me back to reality, and I looked at my new friend and said,

“This doesn’t even seem to phase you.”

She smiled and said,

I looked at her and said,

“You have no idea how much I needed this experience with you.”

As we traded phone numbers and hugged,

I could feel peace run through my body. 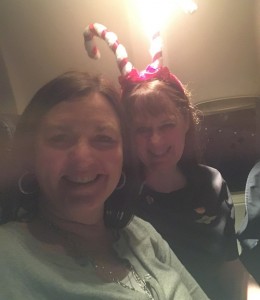 Tim snapped a couple photos of us together, then we went our separate ways. 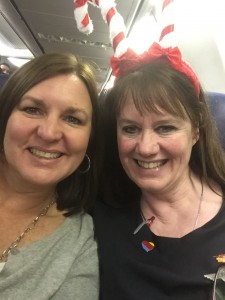 When you’ve met an angel, though, you really never say, “Goodbye.”

They have a way of sticking around in your heart……………………forever.

I believe God knew 2015 needed to end with this kind of gift to carry me through the next year.

I want to be fearless.

I want to trust Him…………in all things.

I haven’t had much time to blog the past few weeks.

We’ve had a lot of things going on with our family that have kept me from being able to put my thoughts into words,

but I’m back and it feels so good.

Never underestimate the power of God in your life.

You never know when He’s sending someone special your way to give you just what you need for the next season.

For God has not given us a spirit of fear and timidity,

I look forward to sharing 2016 with each of you!

It’s going to be a great year!