I just couldn’t head to bed without sending a quick note to acknowledge the 9-month anniversary of Nick’s life in Heaven.

I carried you inside of me, Nick, for a sweet nine months.  I remember wanting a girl so badly……after having two boys, losing our sweet little Adrienne, and then having another precious boy, I was just so hoping and praying for a little girl to dress in pink.  Then you came!  Chubby, smiley, full of everything perfectly wonderful…………our fourth little boy!  A true bundle of joy!  You brought some sort-of peace to my heart, Nick.  You made me feel complete.  You were my one and only brown-eyed baby, and my heart melted when I held you.

I have lived without you here with me, Nick, for a long yet busy nine months.  I didn’t think I could do it.  I begged, pleaded, and believed that God could heal you.  I really did.  With every inch of my heart, I believed and I poured out my soul over and over again at the feet of Jesus trying to convince Him that I couldn’t make it without you here, trying to convince Him that we could serve Him more effectively if you were a cancer survivor, trying to convince Him that so many more would believe in His amazing healing power if you could just be spared an earthly death.  But in the end, Nick, God had other plans.  He wanted you back.  He made it 13 long years without you near Him, and He wanted you back Home.  He wanted to heal you in a way that medicine never could, in a way that herbs never could, in a way that food never could.  He wanted to make you perfect, Nick, and now you are.  And He wanted me to trust Him through it all……and I have tried and am still trying.  It’s not easy.
But giving up on God now would be the worst decision I’ve ever made.
He’s carried our family through so much and He still does.

Tomorrow a group of boys from the high school and some guys from KCU will be coming to our house to draft a Fantasy Football  League called  “The Big Yard League,” named after one of Nick’s favorite songs, “Big House.”  It will be bittersweet to not have Nick in the middle of all the commotion making his picks, grinning as he chose his favorite players, smiling when I would hand him a warm brownie on a plate.  But we’ll get through it.  We’ll laugh, we’ll visit, we’ll eat, we’ll reminisce, and we’ll love.

Nick would expect nothing less.

I love you all and thank you for sharing life with us.  Thank you for every prayer for our family!

I just had to take a minute to pay tribute to my little man in Heaven.

He is still so loved here in the Nischan house!  And always will be! 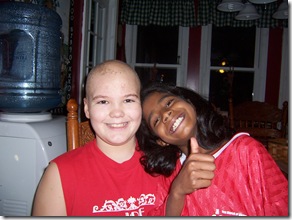