I never thought an after-school teacher’s meeting about Kentucky’s new CIITS Lesson Plans would turn into a chance to grow closer to God, but it happened!

We finished our meeting and teachers were shutting down their computers when Brenda started sharing about the cute way she found to teach main idea to her third graders.

As she talked about using puzzles from Dollar Tree and Post-it notes to help kids see that each part of the puzzle was just one part of the main idea of the puzzle picture, I found myself getting tears in my eyes.

She said, “I would lift one Post-it note, and we would talk about what was under it.  I would ask my class, ‘Is this puzzle just about one pig?”

Then she said they would talk about how the main idea was the three little pigs and all the Post-it notes covered supporting elements of the main idea.

After she was finished sharing, I asked if I could take come take pictures of her puzzle.  And I shared about how the whole lesson had such a spiritual depth to me.

We live under just a Post-it note of God’s story!!

We are not the main idea.

The main idea is God’s plan for mankind. 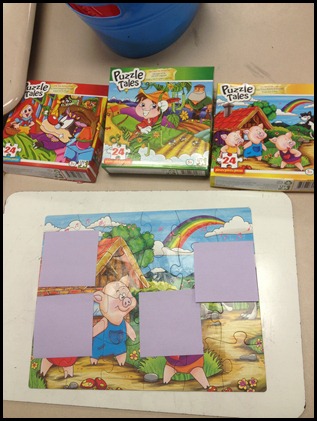 As I was looking at the first picture, I saw the rainbow and thought about how sometimes people’s lives seem to be all rainbows.

And then it hit me!

Just because we can’t see the whole picture doesn’t mean the rainbow is gone.

We just can’t always see it.

Faith knows there is a rainbow……….

somewhere in our story.

It may just be under a Post-it note for a season. 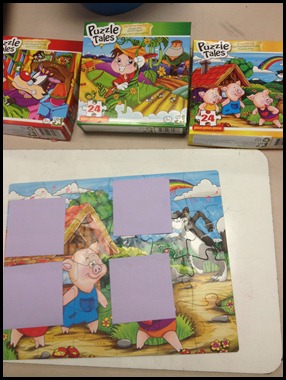 I don’t believe we’ll see the whole picture until Heaven.

When we do, everything will make sense.

The rainbow, the big bad wolf, and all the supporting characters.

Until then, faith keeps us singing,

Because perfect Love casts out fear. 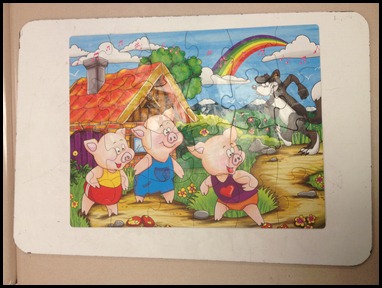 And God, the author and perfector of our faith, has a plan.

“We live under one Post-it note of the plan at a time!!”

Have a happy Post-it note-covered day!