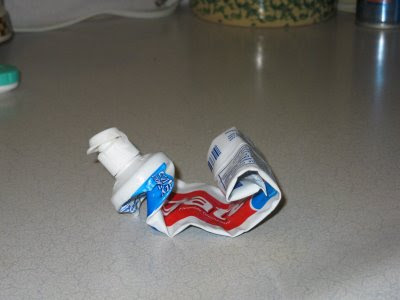 It probably started as a rebellion.

….until I threw it away!

Honestly, it’s like the empty roll on our toilet paper holder…….noone else has ever taken the time to read the manual on how a new roll of paper is added. I have watched an entire roll of toilet paper be used while sitting on top of the empty cardboard tube of the last roll and just been amazed that everyone else in my house thinks this is “normal!”

But that’s a whole other story….

This tube of toothpaste has begun to fascinate me, really.

I still manage to squeeze out just enough to brush my teeth one more time….

And amazingly so does Tim (and who knows who else slips in our bathroom and does the same thing!)

Noone has complained yet about this tube’s lack of resources. It’s as if just enough toothpaste arrives to get us through another day!

And the more I look at this tube, the more I realize that in many ways this is how you live when you’re grieving and really when you’re simply trying to live for Christ during a difficult time in your life.

One “squeeze” at a time. Not really feeling stocked up on much of anything.

Actually feeling fairly empty. As if life has literally been squeezed right out of you.

But then, somehow, God in His amazing wisdom knows the secret to making our empty tube of toothpaste somehow still have worth.

Somehow still provide just enough strength to do what we need to do for one more day.

There’s so many days when I would much rather pull the covers over my head and sleep my way through life.

But, oh, I am so thankful for a Father who tells me that He can provide the strength I need for one more day!!!

Eventually, I believe, that he will restore my “tube!” As if through a divine run to Wal-Mart, God will place a “new tube” of strength within me….and within Tim.

But for now, I have to keep on allowing God to squeeze daily just enough strength from me to keep me going!

And I’m trusting that He can and will.

Because once again, I believe His Word is true!

I Peter 4
10Each one should use whatever gift he has received to serve others, faithfully administering God’s grace in its various forms. 11If anyone speaks, he should do it as one speaking the very words of God. If anyone serves, he should do it with the strength God provides, so that in all things God may be praised through Jesus Christ.
And in my grief, I can think of no one more worthy of praise than my Lord Jesus Christ!! After all, it is becuase of His death that I have hope and am confident that Nick and Adrienne are not dead! They are more alive than I could ever imagine!

With the strength God has given me for today…..with yet another squeeze on my very pitiful “tube,” I end my thoughts with a question Jesus asked Martha in John 11:26,