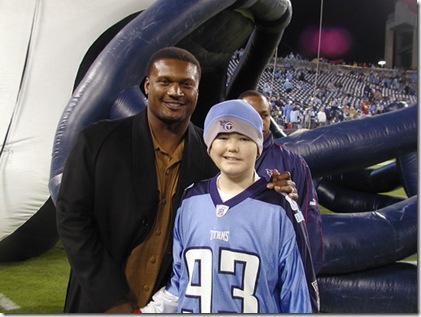 (This photograph is Nick with Steve in November just weeks before Nick went Home to be with the Lord.)

As we were leaving to attend a Fourth of July cookout this evening, I received a text telling me that Steve McNair (Nick’s favorite NFL player next to Mike Furrey) had been killed in Nashville, TN, this afternoon.

Knowing his wife and four sons need our prayers.

I found it so amazing that Steve played 13 years in the NFL and Nick was 13 when he left us here.

Two great people.  So glad they got to meet while on the earth.