If anyone wondered why my parents weren’t in any of my graduation or surprise party pictures, this will explain—–

Their anniversary fell on the same weekend, so dad had planned a trip with mom to Niagara Falls before they realized the dates would conflict. 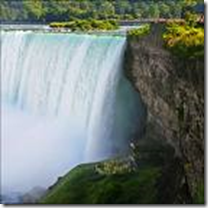 While they were on their trip, mom said she looked everywhere for a penny..our special little way of feeling Nick’s presence.

We had taken all four of the boys to this very same spot with mom and dad in 1999, so it brought back lots of memories for my mom.

Remembering Nick in his stroller NOT happy when mom took his picture next to a Canadian Mounty, 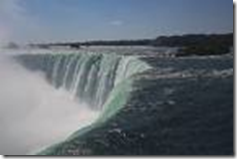 I found some pictures online of the falls…it’s hard to find pictures that really do it justice.  It’s just one of those natural wonders that takes your breath away in real life.  The sound of the water as it rushes over the falls simply amazes me even now.  The power of the falls, the reality that water plummets over these rocks 24/7 and yet never empties out the river above or floods the river below simply leaves me speechless. I remember being a nervous wreck while we were there.  No fences hold back children as you stroll the sidewalks along the water’s edge before the falls begin. I was quietly yet constantly terrified that one of the boys would get away from us and somehow fall into the seemingly calm river above the falls leaving me unable to do anything but watch them disappear from my sight as the river literally ends where the falls begin.

When we finally got back to Grayson in 1999, I remember being flat on my back on the couch for the entire day with some sort of stress issue that had settled into my back.  I think I had stuffed down my anxiety throughout the entire vacation, and it had somehow decided to attack my body when we got home safe and sound.

Little did I know that just three years later, Nick would face the beginning of something so much more frightening than a waterfall.

Little did I know that ten years later Nick would not be with us. 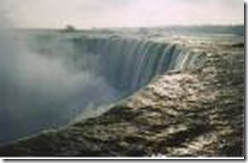 I guess it’s good that we don’t know what tomorrow holds.

I know it’s WONDERFUL that we do know WHO holds tomorrow!!

Well, mom called me as they were leaving their little vacation this past weekend to tell me congratulations and to tell me about their trip.  I remember her mentioning that she was disappointed that she hadn’t found a penny anywhere but that she had gotten a Canadian penny and was bringing it home.

On Tuesday of this week, Mom was going through her pictures from the trip and came across the one below that simply TOOK HER BREATH AWAY!!!!!!!!!!!!!!!

This is a photo she took zoomed in of the water as it is going over the falls.  She emailed me the picture and said, “I did not see this when I was taking the picture and I’m so glad..I would have tried to get it!”

Do you see it?

Mom and I think we know!

It was almost as if Nick was trying to tell my mom that he is great!  That he can literally sit on the edge of the Niagara Falls without a worry in the world!!!!

I don’t think so!!!!  And I’m not going to stop believing that He wants us all to be assured that Nick is safe in His loving hands….

Safe and yet having the time of his life!!!

Let me know if you see what we saw in this picture?!?!? 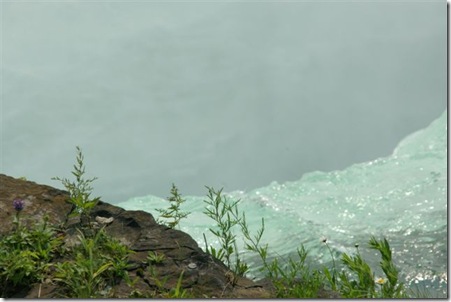 Thank you, God, for touching my mom’s heart in such a special way!