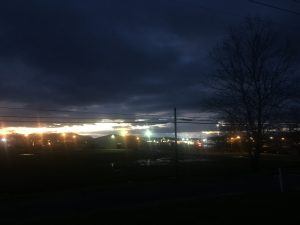 I remember sitting on the beach and watching my last sunrise with Nick.

Much like this morning in Kentucky, the dark clouds attempted to hide what I knew was tucked right behind them.

I knew they could try to mask the beauty of that morning,

but they really had no power.

The sun was still rising.

We just couldn’t see it.

And, honestly, I was struggling to feel it.

preparing my heart for what the doctors had already tried to do.

Nick and I sat in silence and now I often wish I would have had the courage to say what was on my heart.

I wish I could tell Nick I knew the sun was really rising.

I wish I could tell him there were no clouds dark enough to take away the light of eternity.

I wish I could tell him the power of the resurrection was so unbelievably real that there was no need for either of us to fear tomorrow.

I just sat beside him and snapped pictures as we quietly watched a few random tourists stroll the mostly dark and somewhat ominous beach.

Life can be so dark.

Life can feel so ominous.

Eventually, the rays of light fought boldly with the atmosphere, and without warning,

they began to burst through from every side just like they did today.

Relief flooded my soul as light began to win that morning,

NO MATTER WHAT THE NEXT FEW MONTHS HELD

the Light would eventually WIN. 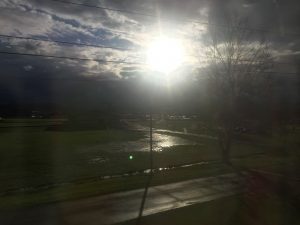 In spite of all our prayers for earthly healing,

Tim reminds me often that we don’t know what Nick was praying in those last days………..

I think I fully know.

He didn’t fear the darkness.

He knew more deeply than most adults will ever know just how magnificent the light is just on the other side.

Two years passed by in my grief, and I found myself at a writer’s conference in North Carolina sitting beside a woman who had recently and unexpectedly lost her husband.

We sat face to face as she began to cry, telling me all about him.

She told me how early morning was the most difficult part of the day for her,

because she and her husband had always eaten breakfast together before they left for work.

As our conversation ended, I asked if I could pray with her,

and I realized we had talked for nearly an hour without knowing each other’s names.

Names are so much less significant than heartache when it comes to bonding.

She looked up at me with tears in her eyes and said, “Dawn.”

I could feel every part of me catching my breath.

Here I was, facing someone whose very name was the time of a day she found most difficult to face.

I was literally “facing Dawn” with tears running down her cheeks.

We prayed, and I was overwhelmed with how God moved in that moment,

speaking words from me that I knew were really from Him to her.

Her name was no accident.

Her tragic loss was not unnoticed.

The dark clouds were only blocking the sunrise for a season.

She would see the sun again.

Dawn would one day be able to face each new dawn

with strength and hope and joy and peace.

I blogged my way through my own dark-cloud season of life and reached a day where I knew it was time to share my journey in a way that could help others journal their way through their own dark days.

As we prepared the book for publishing,

I knew the photo on the cover had to be of my last sunrise with Nick,

and I knew the title had to be

I don’t know what you’re facing this morning,

but I do know this.

Light has already won the battle.

The Son is there.

Even if you can’t see Him.

ripping every dark cloud away…….

Because of this, we can boldly face each new dawn,

no matter how dark,

until we see Him face to face.

The light shines in the darkness,

and the darkness has not overcome it.

Facing Dawn:  A Morning Devotional for the Brokenhearted 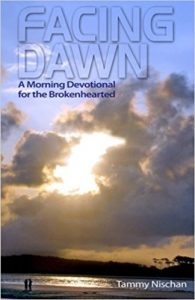