When the Fog is Thick and Words are Missing 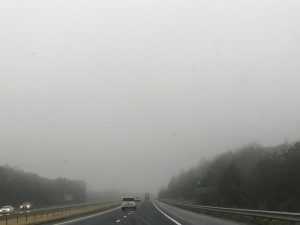 It’s not too difficult to imagine Job,

“What did I do to deserve this?”

“Why is this happening to me?”

And sitting with a friend who is full of them

can feel like driving into a very dense fog.

Job’s friends must have been terrified by the questions coming from the mouth of Job,

a man who before this time sat at the city gate full of strength and power.

So they listened for as long as they could,

But then had to step in.

Try to realign his thinking.

And help him see what no eye possibly could.

Filled the air with new words.

Tried to fill in the blanks.

Provide answers on an exam for which none of them had studied.

And I couldn’t help but think….

are we any different today?

When someone is hurting,

Speaking into fog as if our hot air could somehow blow it away.

Filling in sentences with missing words –

making every attempt possible to remove all empty blanks.

But Job was learning something in his suffering

that his friends had not yet learned.

Fog removal wasn’t what he needed.

Questioning the fog and stammering over the empty blanks

was his way of moving through his suffering.

He didn’t need answers as much as he needed to ask questions.

He even tells Zophar,

“Everything you know, I know,

I am not inferior to you.

Yet I prefer to speak to the Almighty

and argue my case before God…..

If only you would shut up and let that be your wisdom.”

Job reached his limit with his friends,

And he wasn’t afraid to let them know.

“Be quiet, and I will speak.

Let whatever comes happen to me.

I will put myself at risk

and take my life in my own hands.

Even if he kills, I will hope in him.”

but he wasn’t about to give up Hope.

he never forgot this truth.

God had made him.

And God could take him away.

So he continues his unleashing of thoughts,

from a place of deep pain,

unafraid of the outcome.

Because in the end,

he knows God will still be there.

He continues looking up,

and speaking from the deepest part of his soul

to the One who breathed that very soul into him,

unafraid of the consequences.

Another friend jumps in though.

It’s hard to watch a friend drive into danger.

And not try to stop him.

attempting once again to turn Job around.

As if earthly wisdom could somehow end suffering.

Or even make it easier to bear.

The truth is there are no words this powerful.

And Job isn’t afraid to speak this truth in reply,

“You are all miserable comforters.

Is there no end to your empty words?

What provokes you that you continue testifying?

If you were in my place I could also talk like you,

I could string words together against you

and shake my head at you.

Instead, I would encourage you with my mouth,

and the consolation from my lips would bring relief.”

One thing he’s learned in his suffering is that words have power.

And walking a mile in someone else’s shoes is the only way to know how that mile really feels.

Even similar roads can’t be compared,

because we’re all wearing different shoes.

So we leave Job today still sitting in the same ashes.

Surrounded by the same friends….

and the same dense fog.

The only thing that’s changed is the page we’re on.

That’s how some days are going to be.

So what do we do as we close the Bible and step out into the world today?

I think we pause before we speak.

And do what Job continued to do.

Trust the One who created both the fog and the empty blanks.

Even when we can’t see what’s coming and sentences don’t make sense.

Because sometimes roads are foggy.

And sometimes there are empty blanks.

Some trust in chariots and some in horses,

but we trust in the name of the LORD our God.