When Your Hands Feel Empty 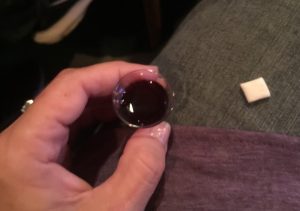 When David ran to the battle line holding only a sling and a small bag of stones,

he wasn’t any less equipped than the Israelites standing behind him.

Now there was no blacksmith to be found throughout all the land of Israel, for the Philistines said, “Lest the Hebrews make themselves swords or spears.” But every one of the Israelites went down to the Philistines to sharpen his plowshare, his mattock, his axe, or his sickle, and the charge was two-thirds of a shekel for the plowshares and for the mattocks, and a third of a shekel for sharpening the axes and for setting the goads. So on the day of the battle there was neither sword nor spear found in the hand of any of the people with Saul and Jonathan, but Saul and Jonathan his son had them.

then charging inflated prices for even farm equipment to be sharpened.

With no swords or spears in their hands,

And considering the fact that Goliath taunted them for several days before David showed up on the battle line,

the Israelites felt as weak as they must have looked.

Who wants to face an enemy unarmed?

David, though, had learned something in his years as a shepherd.

He approached Saul, ready to fight Goliath, and said,

“Your servant has been keeping his father’s sheep. When a lion or a bear came and carried off a sheep from the flock,  I went after it, struck it and rescued the sheep from its mouth. When it turned on me, I seized it by its hair, struck it and killed it. Your servant has killed both the lion and the bear; this uncircumcised Philistine will be like one of them, because he has defied the armies of the living God.  The Lord who rescued me from the paw of the lion and the paw of the bear will rescue me from the hand of this Philistine.”

David knew the weapon he needed was not a sword.

The weapon he needed was God’s presence.

Saul didn’t get it though.

Scripture says when Saul realized David wanted to go to battle he…..

“…..dressed David in his own tunic. He put a coat of armor on him and a bronze helmet on his head. David fastened on his sword over the tunic and tried walking around, because he was not used to them.

“I cannot go in these,” he said to Saul, “because I am not used to them.” So he took them off.  Then he took his staff in his hand, chose five smooth stones from the stream, put them in the pouch of his shepherd’s bag and, with his sling in his hand, approached the Philistine.

David had the courage to face Goliath with no sword in his hand,

because he had learned to lean on God as His one and only source of strength.

He also had the courage to face the entire Philistine army

knowing the Israelites standing behind him held only sticks and stones in theirs.

Knowing God was on his side,

David was able to face the enemy single-handed.

As Goliath made fun of his sticks and stones,

“You are coming against me with sword, spear, and javelin,

but I come against you in the name of the Lord Almighty, the God of the Israelite armies.”

That’s the thing about faith.

It empowers us to do what the world thinks can not be done.

It pushes us forward when everyone around us screams, “Stop.”

It keeps up stepping ahead onto roads we’ve never walked before,

giving us courage with every twist and turn.

Every Sunday when I take a communion,

I’m reminded of something I want to remember all week long.

The enemy has already been defeated.

This means that no matter what I face or how empty my hands may feel,

I’m holding all I need to make it through the day.

and to the Philistines he seemed powerless.

But in God’s eyes,

David held the one thing that mattered –

and that was faith in a strength not found in human hands.

Every week I hold a cup of juice and a piece of bread.

To the world these two things may seem anything but powerful.

I’m holding the very things that proclaim my faith in His Son’s death and the power of His resurrection.

No power can stand against them.

In my humanness, my hands often feel empty.

that my hands are very full.