Why Can’t It Be This Obvious???

Cast all your anxiety on him because he cares for you.

Be self-controlled and alert. Your enemy the devil prowls around like a roaring lion looking for someone to devour. Resist him, standing firm in the faith, because you know that your brothers throughout the world are undergoing the same kind of sufferings.

And the God of all grace, who called you to his eternal glory in Christ, after you have suffered a little while, will himself restore you and make you strong, firm and steadfast. 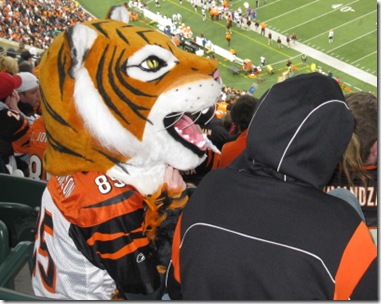 This past Sunday our family had the opportunity to spend the day in Cincinnati at the Bengals/Browns game….thanks to Mike and Koren Furrey (Mike is a wide receiver on the Browns who we became dear friends with during Nick’s fight with cancer…WE LOVE YOU, MIKE AND KOREN!). 🙂

I was so thankful to be with my family doing something Nick would have enjoyed so much on the one-year anniversary of his journey to Heaven.

Mom and I got the biggest kick out of the “Bengal” sitting several rows in front of us, and I was able to snap some “secret” pictures as she was talking to her friend and then later pretending to bite her shoulder! 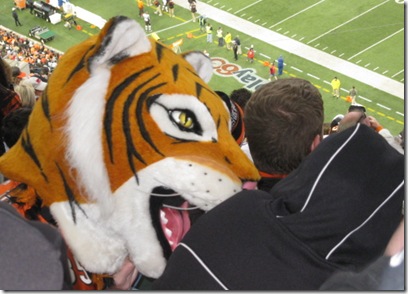 As I looked back through my pictures from Sunday and saw these photos, I couldn’t help but think of how obvious it was to see the “possibility of danger” facing the lady in the black jacket who was sitting next to a “ferocious animal” ready to devour her at any given moment.

Then I thought, “WHY CAN’T IT BE THIS OBVIOUS IN THE SPIRITUAL WORLD???”

I mean, if we could just see the devil “roaming to and fro…seeking whom he may devour,” maybe we’d be more likely to run the other way!

My prayer tonight is that our eyes would be open to his jagged teeth, his evil panting, his piercingly hate-filled eyes………

And that when we do see him, we will RUN the other way and not be afraid because………..