Ezekiel 1
28 Like the appearance of a rainbow in the clouds on a rainy day, so was the radiance around him. This was the appearance of the likeness of the glory of the LORD. When I saw it, I fell facedown, and I heard the voice of one speaking.

Last summer a friend and I were given the opportunity to take Todd, Nick, and 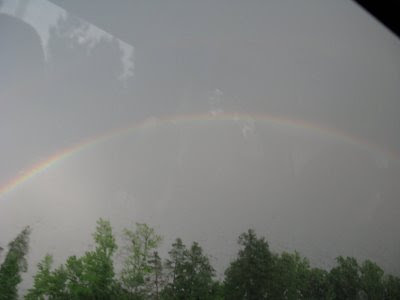 one of their best friends, Caleb, to the beach for a week. This trip was a gift from a man whom we never met….only spoke to on the phone. And it was as much a gift to my friend as it was to me and my boys. Just a time to slip away from everything that had been going on in both of our lives and sit on the beach and read, pray, talk, and watch the boys have fun.

On the way we drove through a horrible storm. It was one of those moments in time when you want to stop but at the same time you want to keep going so that you can hopefully “drive out of the storm!”

Finally, the sky became clear and the feeling of relief flooded our bodies…..especially mine….

with hands gripping tight to the steering wheel.

As we celebrated no more torrential rain, thunder, and lightning, we noticed in front of us the most perfect rainbow arching from one side of the interstate to the othe-you could see the rainbow perfectly from one end to the other (I remembered it as a double rainbow, but when I went back to look at pictures I realized it was just a beautifully complete single rainbow!!)

It was gorgeous, and my friend began snapping pictures as we drove along. We passed several cars that had actually stopped along the interstate to do the same thing!

In my heart I felt such warmth. I even felt that this could be a promise from God that if we could just keep pressing on in the “storm” of Nick’s cancer (which even on this trip we were heavily in the midst of with Nick being in back pain and his neurosurgeon encouraging us to “go ahead and enjoy the week at the beach”) that He would be there on the other side-full of promise and hope. Just like the double rainbow. 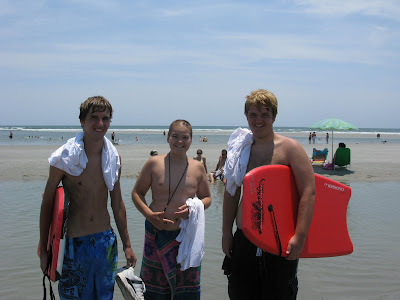 Well, we had a wonderful week at the beach! We soaked up the sun, putt-putt golf, ice cream shops, fun restaurants, playing in the waves, reading on the shore, video games, everything we could think of!

But, as you know, the worse was still ahead of us in Nick’s fight and little did we know that the very next week Nick would have his most devastating MRI up to that point and that from that moment on Nick would slowly get sicker and sicker. 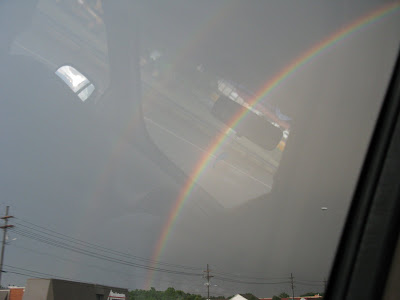 A couple of weeks ago, I was driving Olivia to church for basketball practice and we were driving in a downpour coupled with heavy winds. This weather was following a terrible ice storm and lots of snow just a week or so before.

Olivia said, “Do you think Nick is responsible for this extreme weather?” I kind-of laughed and said, “If he could be, he is. Give them lots of ice, snow, wind, rain! I can just hear Nick saying that!”

As I got home and began doing some things around the house, my phone began to ring. First Roxy, then Brandon, then Martha, then someone else……..all telling me to look outside.

There was a double rainbow!!! It was beautiful!! I felt that the “extreme rainbow” was just another way Nick could be saying “hi!” and God could be saying, ‘My promises are still true!”

Well, this week passed, and as you know if you have walked it with me, it has been everything for me spiritually….

On Wednesday evening I was finishing one of the books I was reading while the kids were at youth group and at the end the author had a beautiful prayer and then wrote the words, “take time to sing praise to God asking Him to make Himself known to You at this very time.”

I was home all alone.

Who would ever know?

I closed my eyes and began to sing out loud some of my favorite worship songs.

As I ended this time with God, I looked down at my cell phone and noticed a voice mail. I decided to listen to it just in case it was one of the kids and it was one of Olivia’s friends saying, “Tammy, look at the double rainbow.” I thought surely this hadn’t been on my phone all week as I had had lots of voice mails since then, so I called her mom to ask about it.

She told me that “yes” in fact there had been a beautiful double rainbow that very afternoon.

Noone had called me. Noone had told me. I asked several other people and sure enough it was a beautiful, beautiful double rainbow around the same time as the week before! I knew deep inside that for some reason God didn’t want me to know about it until the end of my praise time on that evening…..it was another message from Him to me and the timing had to be after the promise not during.

As I sat there thinking about what in the world the significance might be of these double rainbows coming just a week apart, I realized that the first one was on February 11th and the second one was 7 days after the first. 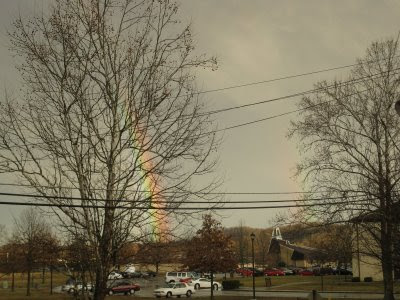 Nick had given himself the nickname 7-11 when he was diagnosed with his second brain tumor after four years of no recurrences! That’s why his website is http://www.nick7-11.zoomshare.com/!

I felt immediately the most amazing peace. God was giving me his nickname back through double rainbows!!!!! And this all happened on the same day as the “hummingbird/sparrow story and the feather!”

Thankful for a God who speaks in ways I can hear!

Love to all of you,