A Balancing Act that Never Ends… 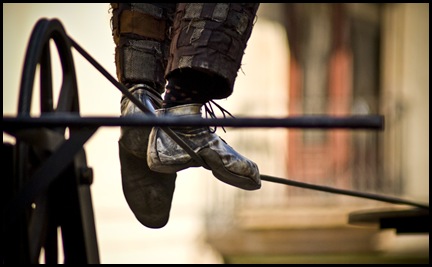 You’ve probably watched someone walk across a tightrope before…arms outstretched, toes perfectly pointed while feet carefully cross in front of each other. The tightrope walker moves slowly and steadily attempting to keep his balance on the thin, small rope as he moves from one side of the arena to the other high above the unnerved crowd who as a group seems to be holding its breath with every step of the brave entertainer.

I find life to be a lot like tightrope walking.

I teeter daily between these two things:

sadness for a world so full of pain and heartache.

Tim and I just left Aaron’s funeral.  Hugging Tim and Sandy and crying as we embraced for what seemed forever, I felt the pain all over again and the depth of sadness that comes when forced to let go of a child long before it seems fair.  Does it ever seem fair?  I don’t think so.

I sat with another friend during the funeral who also had to let go of her 13 1/2 year old daughter years ago after a fight with leukemia.  Her daughter would be my age now, so the loss for her has been nearly 30 years. Even though that much time has passed, tears flowed from her eyes in the same way they flowed from mine. Grief has no ending.  I held her arm throughout the service and hoped that in some way my hands were comforting her in the way her daughter Andrea would have wanted to do if she were here.

I find myself mentally stretching my arms out far on each side so as to take the next step in life without falling to one side or the other.

If the LORD delights in a man’s way,
he makes his steps firm;

though he stumble, he will not fall,
for the LORD upholds him with his hand.

I waited patiently for the LORD;
he turned to me and heard my cry.

He lifted me out of the slimy pit,
out of the mud and mire;
he set my feet on a rock
and gave me a firm place to stand.

He put a new song in my mouth,
a hymn of praise to our God.
Many will see and fear
and put their trust in the LORD.

I wonder sometimes how to take the next step, and then I read passages like Proverbs 4:25-27 and I feel inspired.

Let your eyes look straight ahead,
fix your gaze directly before you.

Make level paths for your feet
and take only ways that are firm.

Do not swerve to the right or the left;
keep your foot from evil.

Suddenly, I think of Aaron and Nick and Andrew and Jared and Tyler and Andrea and Colby and Zach and so, so, so many more who have slipped from this old earth into a new and glorious world and I realize that, like them, God is calling me to look straight ahead and fix my gaze directly before me on Him.

Arms outstretched showing my total dependence on Him (no clinging to people or things around me), I determine today to keep looking straight ahead.  After digging into His Word (our only weapon against the devil’s attempts to discourage and steal our joy), I find the strength to regain my composure and become energized once again to press on in this balancing act of life.

Praying you stay focused on Him as you continue this balancing act called life,