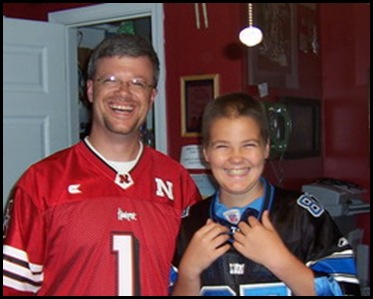 Tim is trying to get back into the “swing” of his fantasy football teams.  This was something that Nick and Tim enjoyed so much.

As I was doing lunch duty the other day, I was talking to the boys as they went by and one boy was telling me about his favorite video game…

My heart sank as I tried to keep a smile on my face.

Nick saved his birthday money every year in May so that he would be ready to go to WalMart at midnight in August when the next edition of Madden came out.

I miss those days.

I just had to slip back in time this morning and find a happy picture of Nick wearing a football jersey.  This Saturday at 11:30 a.m. our county junior football league (Carter County JFL) is dedicating their field to Nick.  There will be a mural of Nick in his uniform on the side of the building eventually and an engraved rock on the 50 yard line that shares Nick’s favorite verse  – Joshua 1:9. (Be strong and courageous..)  They are naming the field The Field of Courage.

I’m honored that Nick is leaving such a legacy,  but his smile is missed so much in this house.

I think that is why verses like this one are in the Bible:

I press on toward the goal to win the

prize for which God has called me

If I am going to survive my grief, I have to cling to verses like this one.

While I can slip back in time and give thanks for all the wonderful years with Nick, I have to keep pressing on…..

so that I can win the prize!

Nick has won the race of a lifetime!

If you are reading this, you are still in the race!

Press on toward the goal.

Someday I want to hug all of you at the finish line!