My breath is nearly taken away when I look back on this past weekend and think of how God brought me to a place I thought I might never go…………….

And in bringing me to this place, He also brought me to the time when I could share a story I have held on to until I felt God saying, “It is time to share…..”

Now is the time:

In mid-January during the ice storm that paralyzed most of the state of Kentucky, there was one particular night when we were up late knowing that many “snow days” would be following…..

I was in bed reading a book at about 1 a.m. I was missing Nick so much, because he loved snow days more than any of our kids. Thinking of him was causing me to have one of those “sad nights.” Tim came into the bedroom holding two jewelry boxes. Now, this isn’t a “normal” event in our house, so I looked at Tim with an expression of “What? Why? No.” I truly thought that for some reason Tim had decided that if he bought me something it might “cheer me up.” And I knew immediately upon seeing the two boxes that there was nothing that this world could give me that could ease the pain of losing Nick……..

or so I thought.

I opened the first box…a long thin rectangular box and in it was a silver chain. Tim then handed me the smaller square box. My first thought was that Tim was giving me the little “boy and girl” birthstone charms that I had seen on sale at KMart before Christmas…..and while I thought they were sweet and that having all six of our kids’ birthstones might be special, I just knew deep inside that even that would do nothing for my spirit.

As I opened the smaller box I saw a silver heart pendant. I picked it up and looked it over carefully. On the back it said, “Nick”and then had the dates “1995-2008.” It was very pretty, but I still didn’t feel like it was enough to make my heart feel any kind of special peace.

I turned the heart over and noticed that the textureon the front was not smooth…..and as I was rubbing my fingers across it, looking at it, still wondering why Tim had done this, Tim looked at me and said, 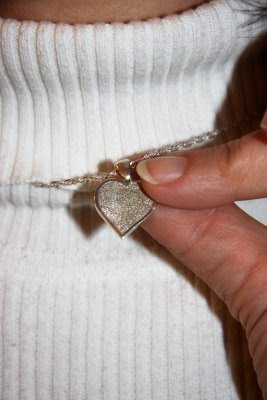 I looked down at the heart and sure enough, I could see the small lines, the intricate curves, the impression of a part of Nick I would never see again in his flesh-like form. I gasped and then began to sob.

I was moved to a point that I had not been moved in such a long time.

I thought to myself, “I will never need another diamond. I have the most priceless jewel around my neck- forever.”

One of my very next thoughts was that I couldn’t wait to write about Nick’s thumbprint! Especially as Nick’s journey had such significance related to thumbs up….starting with my mom’s photograph of the most unbelievable “thumbs-up” cloud all the way to the ultrasound of a friend’s baby doing a “thumbs up” in her mommy’s belly to another baby who did a random “thumbs up” while being photographed at the lake (pictured here) and then finally seeing the “thumbs up” come full circle on the logo for Nick’s foundation. I truly believe that God has allowed Nick’s “thumb print” to be imprinted on history in a very powerful way! My necklace is such a treasured memory of Nick’s character, passion, love, strength, and courage….I wear it everyday with such a sense of “motherly pride!” 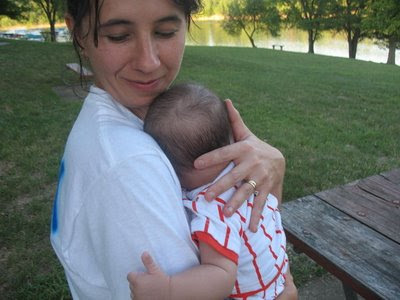 I couldn’t wait to tell you all about the necklace, so the very next day I tried to take photographs of the necklace for my blog, but I couldn’t capture it in a clear enough way. I just felt like I needed to until Mom was here to help me before I wrote about my special gift and shared photos.

Several weeks went by and then one evening I was picking Olivia up from a little friend’s house when I received an unexpected blessing from a three-old little boy. Olivia’s friend’s little brother, Kallen (Thomas the Tank Engine in the photo below), had just woken up when I arrived. He was snuggled on his daddy’s arm, cheeks pink from being curled up on a pillow, and eyes half open and half shut. I stood and talked with Olivia’s friend’s mom for a few minutes and I made a few comments to Kallen while standing there about how cute his haircut was. He just kept snuggling deeper into the neck of his daddy- looking oh, so precious and sweet. Kallen’s never been one to “talk” a lot to me. He might smile at me, but he generally passes me with only a grin.

I finished up my little visit with his mommy and turned to walk from the hallway into their living room when out of the blue, Kallen popped his head up and said in the sweetest voice, “I like your necklace.” 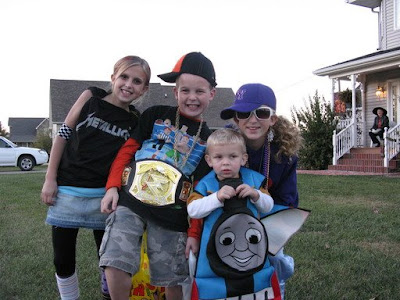 And then immediately tucked his head back down into his dad’s neck. I looked at his mom and dad, they looked at each other, and then his mom said, “That was so weird…..he never comments on anyone’s jewelry.”

I was so touched.

I walked to my car confident that Kallen had seen a glimpse of Nick or an angel or something special about Nick’s “thumbprint” necklace. Maybe it was glowing. I’ll never know. But I just know that somehow his innocent childlike vision had seen something more beautiful than I could ever imagine. I felt such peace.

Then I just knew it was time to write about the necklace. So, I went home and emailed Kallen’s mom and dad to ask if they cared if I shared the story and possibly a photo of Kallen. I began to open my blog and download one of my “not so great” photos of the necklace and blogger.com was having technical difficulty with downloading pictures. I was so disappointed and yet I knew deep inside that there must be more.

Well, this past Saturday something extraordinary happened that made me realize that God had been orchestrating events with my necklace for “such a time as this.” And on the very same day as this special happening, a package arrived in our mailbox which contained two CDs full of pictures from Nick’s Foundation dinner….

And wouldn’t you know it?!!? Beautiful pictures of Nick’s necklace were on these very CDs!!

Oh, Father in Heaven, You never cease to amaze me!

So, tomorrow I’ll share what happened and how God blessed my life in a way that I never would have dreamed or imagined.

Happy 17th birthday to Adrienne…..we miss you and love you so much! Give Nick a kiss for me.