Tammy had a little dog……. 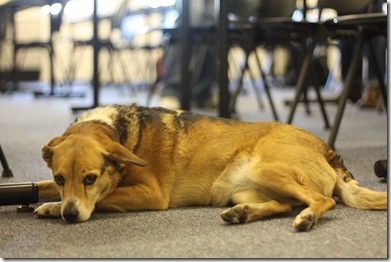 It followed her to school one day,

Which was against the rules.

Friday, I turned around during my photography class and there stood my dog Snoopy!!!!!! She had followed me upstairs in Lusby!

I don’t really know why I decided to share this with you, other than the fact that I thought it was funny.

But after deciding to call this post, “Tammy had a little dog,” I did a little research about the origin of the song “Mary had a little lamb,” and I learned a few things I never knew.

First, the song was written about a real event in history when a student named Mary Sawyer actually took her lamb to school one day.

Also, the author of the song, Sarah Hale, is famous for a few other things I never knew!

She is credited with having the most influence on our country’s decision to celebrate Thanksgiving as a national holiday. She spent 17 long years campaigning in favor of this holiday and through that period of time wrote to five different presidents sharing her reasons for wanting to see this holiday recognized. Her final letter, the one written to Abraham Lincoln, was the one that finally convinced the government to create Thanksgiving Day. Until then, the only holidays in America were Independence Day and Washington’s Birthday.

Sarah also traveled and campaigned for the preservation of George Washington’s Mount Vernon plantation and the completion of the Bunker Hill Monument.

Hale finally retired from from being an editor in 1877 when she was 89. In that very same year, Thomas Edison made his first ever recording on a phonograph, speaking the words of, believe it or not, Sarah’s little rhyme, “Mary Had a Little Lamb.”

I share all of this with you for this reason:

Some day we will merely be part of history.

So, what are we spending our time doing?

Where are our passions focused?

What will people remember about us?

Not that we need to be famous. I don’t consider Sarah Hale famous.

But, I do think it’s a good idea, every once in a while, to stop and simply reflect on our life goals. Have we given up on something because as much as 17 years have passed and nothing has changed? Have we felt convicted about something but then remained silent out of fear?

Tonight, I look at the picture of my determined dog Snoopy and I think of a determined Sarah Hale, and I have to ask myself, “What am I determined to do?”

Praying your day is a day of purpose and determination,