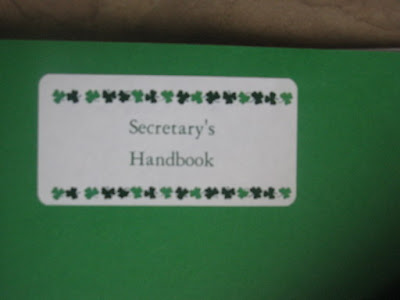 As Olivia unpacked her back pack one day last week, she started talking in a very “put out” kind-of way and said,
“I don’t get it! I thought I was the secretary for 4-H. Well, actually, I am the secretary, but then they had to go and give me this notebook.”
With that, she plopped down the green notebook (pictured above)on our kitchen table.
I had to laugh when I picked it up and saw that it was entitled, “Secretary’s Handbook.”
Olivia began pulling pieces of paper out of the handbook and acting so disgusted with the “work” she had not realized would be part of her “title.”
It made me stop and think about how we view our lives as Christians so many times.
“I don’t get it. I thought I was a Christian. Well, actually, I am a Christian. But then God had to go and give me this Book!” 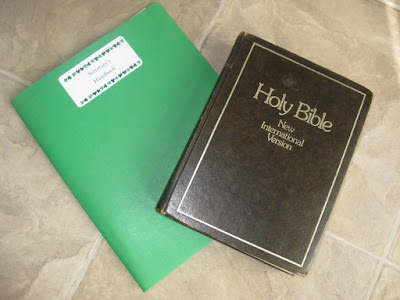 Becoming a Christian doesn’t just mean “easy street or ticket to Heaven.”
It means realizing that “the rain falls on the just and the unjust” …..
and that everything we want to say should not be said…..
and that putting others first is not an option but a requirement ……..
and that going the extra mile is exactly what God wants us to do EVERY time we have a chance to serve……..
and that being content in all situations is what God desires from us…….
and that we should “do everything without grumlbing or complaining”……
and the list goes on and on and on…
What did we sign up for?
Yes, we have been given the honor of wearing the title “Christians!”
But we have to remember that part of the deal is following the handbook!
Even when it’s difficult!
Striving to be what I “signed up” to be even when the handbook seems overwhelming!