I’ll share about the press conference at KCU tomorrow, but tonight I wanted to share a little story from earlier in the week.

A couple of weeks ago, Erich (our oldest son) surprised his wife with a teacup  puppy Chihuahua.  They named her Sister Sally Brown, and Hugo was so happy to have a little sister.

About eight days after she joined their family, she became very sick and after spending an entire Sunday afternoon in the ER for animals, she passed away. 🙁

Erich and Mallory were so sad, and I actually had a few tears over a puppy I had never met…more because I knew how much Erich and Mallory loved this little puppy and how hard Erich had worked to surprise Mallory.

The next day at school I was sharing with my students about the sad news, and one of my students was so excited to announce that he had one puppy Chihuahua left at his mamaw’s house, and it was free!!

I called his mamaw, and sure enough, she had one little puppy who still needed a home………

Now I’m pretty sure I heard angels singing as she shared this news (not really, but in my heart I did!), so I did what any overly eager mom and mother-in-law who wants to “save the day” would do!  I asked this sweet mamaw to bring me the puppy right after school.  My student was smiling ear-to-ear as he realized how he had saved the day too!!!!!!!!!!!!!!!!!!

As I drove home that afternoon with the little shivering puppy in a box next to me, reality began to set in………

As I pulled in my driveway, I realized that I had made a terribly impulsive decision, and I couldn’t bring myself to get out of the car.  So, I decided to drive around the campus of KCU for a while and call Mallory to see what she thought about the news of this little puppy before going home…..

She was very sweet and very apologetic, but she just felt like she couldn’t replace Sally with a little brown puppy when she had adored her black, teacup Chihuahua so much……….

I told her I completely understood and we talked a little more and then got off the phone.

When I walked into our house with a box holding a puppy, I just knew that Tim was going to think I had lost my mind!!!!!!

So, I did what any mature woman would do at a moment like this.

I hid the puppy in the box on our back deck and went in the house as if everything were normal.  Wouldn’t Lucille Ball have done the same thing before telling Ricky???????

After a little “small talk,” I confessed that I had done something “pretty silly” that day and then warned Tim not to make any faces while I explained what had happened!

I unloaded the story  (Tim did a wonderful job of not making faces by the way) and then shared that the little puppy was on our deck and that it was very cold outside…….

So I brought the puppy in and put her in our bathroom.

Olivia had fallen asleep that particular afternoon, so when she woke up I told her the whole story, and of course her first comments were,

She ran to our bathroom, and as Paul Harvey always use to say, “The rest is history.”

Who would have ever known that on Monday afternoon we would be adding a new member to our family?????

She has been therapy for all of us already. 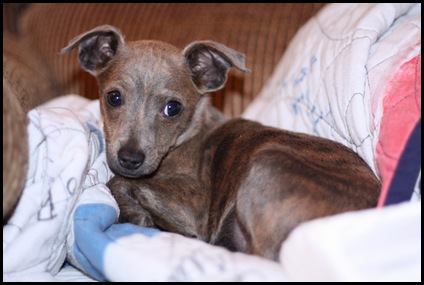